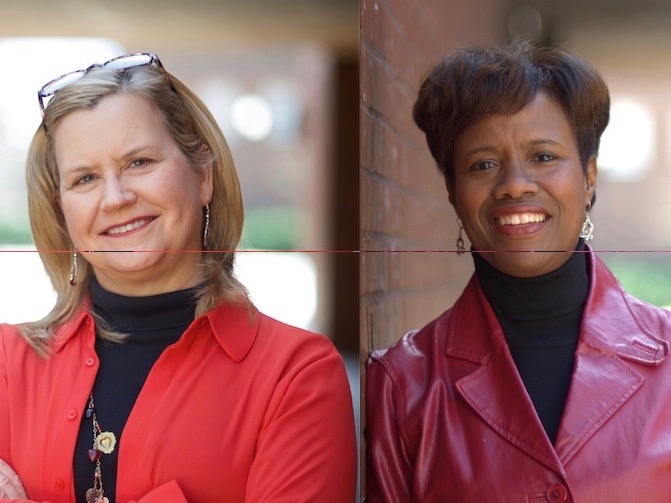 On Thursday, January 25, from noon to 1:00 pm in the Grand Gallery, the series will present a free concert by soprano Rosephanye Dunn Powell and mezzo-soprano Anne Duraski with pianist Joshua Pifer. The group will present solo and chamber music by composers including Joseph Canteloube, Johannes Brahms, Alexander Scriabin, Jacques Offenbach, and new arrangements by Dr. Powell. A gift from Bob Ekelund and Mark Thornton and an anonymous gift have helped to make this performance possible.

Click here for more about the performers and a full schedule for the spring 2018 season of A Little Lunch Music.

Powell serves as Professor of Voice and Coordinator of Voice Studies at Auburn University. A researcher, interpreter, and performer of the African-American spiritual, she has presented recitals and lecture-recitals around the country, in Europe, and in the Caribbean. Recognized worldwide as a composer of choral music, she is considered to be one of America’s premier women composers.

Powell says Cantaloube, born in France in 1859, was a musicologist as well as a composer. He collected folk songs, and on Thursday, she will perform a set of his arrangements. “These are folk songs that he has elevated to the level of art song,” she said.

Powell says the vocal lines Cantaloube arranged are beautiful, and he composed piano accompaniment to depict sounds of nature. “Nature in art song is a common theme, and parallel with love,” she said. “All of these are within nature, depicting love and experiences of love.”

Duraski is director of Auburn University’s Opera Workshop and teaches Voice and Opera Literature. She served as principal lyric mezzo-soprano for the Schleswig-Hosteinisches Landestheater in Flenburg, Germany, and has appeared in opera houses in Italy, Switzerland, and the United States. She recently performed in the role of Suzuki in Puccini’s “Madama Butterfly” with the Mobile Opera.

The singers will perform together two new arrangements by Powell of African-American spirituals. She approaches her arrangements in a similar way as Cantaloube to his folk songs. “To preserve the heritage, I typically try to make sure that I use the original melody,” she said. But she says she uses the piano part to create different colors to help depict the meaning of the words.

Powell says slaveowners would often keep slaves from assembling, so one reason spirituals were used was to express deep emotion to each other. Someone singing “There Is a Balm in Gilead,” which Powell will perform Thursday, would be at a low point, even despondent. She says she wrote a piano part that has a soothing, healing sound, flowing like a balm on the skin and also the soul.

Powell says slaveowners would hear another spiritual, “Every Time I feel the Spirit,” as a song about God. But slaves intended it as very specific to the condition they were in. She says the song gave tremendous hope to slaves for their bodily freedom. It even goes so far as to teach things about how to escape and about the mindset someone should have when seeking freedom.

Pifer is a senior lecturer at Auburn, recently returning from a two-week piano residency in Taiwan. He is an international performer, clinician, and adjudicator, and is a founding member of both Duo Echo with oboist Jennifer Pifer and Plains2 with trombonist Matthew Wood. He released his first solo CD, “Alexander Tcherepnin: My Favorite Piano Works,” in 2015.

Other music on Thursday’s program will be a solo piano work by Scriabin, art song by Brahms, and a comical piece often attributed to Gioachino Rossini.