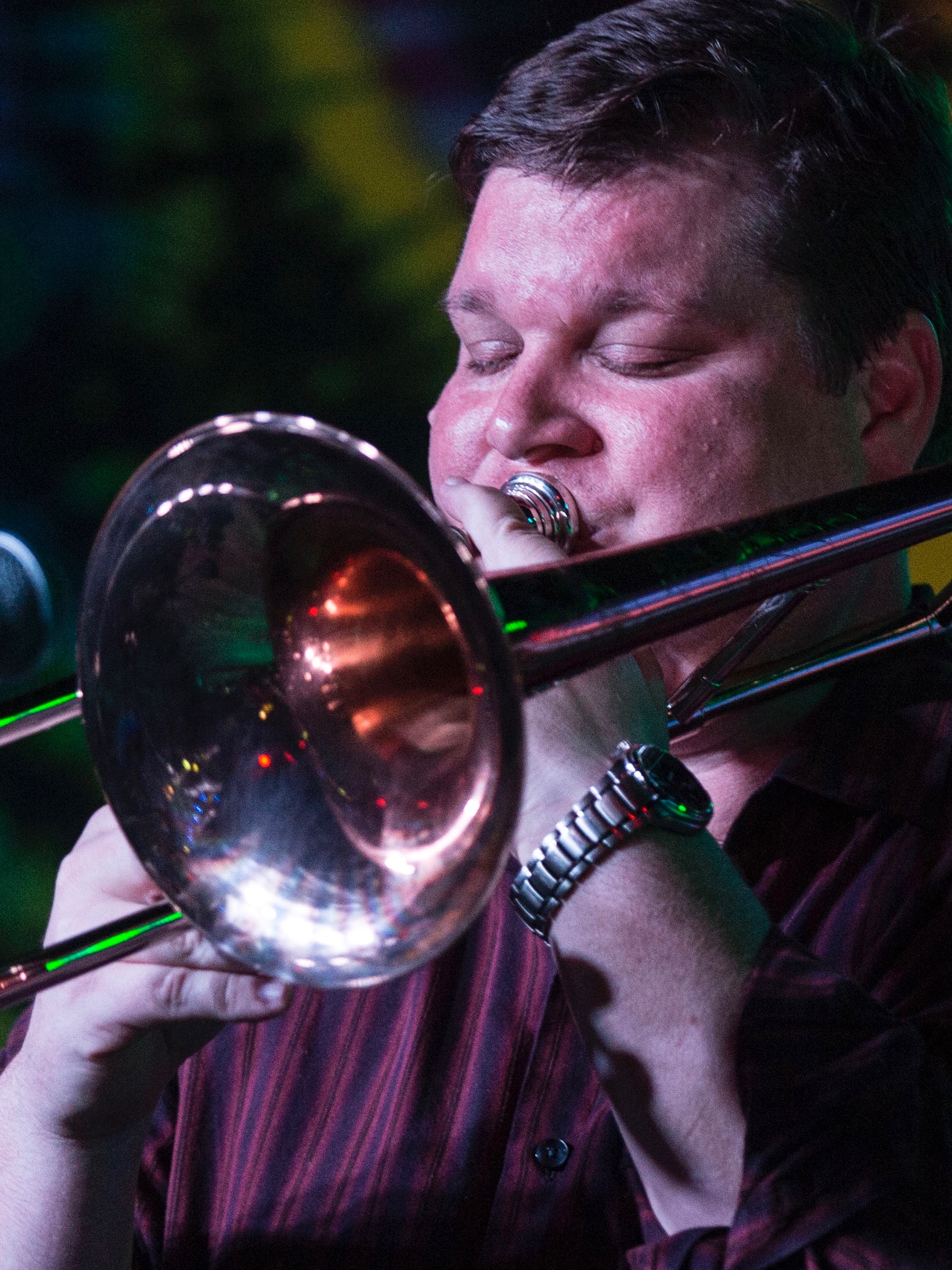 On February 11 at noon, A Little Lunch Music will feature trombonist Jeff Albert and drummer Dave Capello for a free concert of improvised music in the Auditorium. Click here for the event page where you can read more about the performers and hear audio samples. They will also join Cullars Improvisational Rotation for our Jazz! Food! Art! event that night from 5-8 pm. More about the evening performance at this link.

“Episodes is a good word, ” said New Orleans trombonist Jeff Albert. He said he likes to use it instead of “pieces” or “songs” to describe the stand-alone sections of music he and drummer Dave Capello play when they perform improvised music. But they aren’t psychotic episodes. “Well, some of them are,” said Albert.

Albert is active in the worldwide community of improvised music, also called creative, adventurous, or free music. He tours with Hamid Drake and others well-known in the genre, and was named a Rising Star Trombonist in the Downbeat Critics Poll each year from 2011-2015.

Albert is an advocate for the music. He runs the Open Ears Music Series Tuesday nights at the Blue Nile in New Orleans. He also co-founded the New Orleans International Sound Exchange (N.O.I.S.E.) which yearly puts on the Hosting Improvising Performers Festival, or HIP Fest.

After studying jazz in college, Albert said he wanted to be a craftsman trombone player, making a living playing in horn sections and bands. By his late 20s, he said he had accomplished that goal, but it wasn’t enough.

“I realized I wanted to play music that had some artistic outlet for me,” said Albert. He said it was largely improvised music that fit that description.

Before moving to New Orleans in the early 1990s, Capello lived in New York. He worked in that city’s creative music scene with players like guitarist Bern Nix, bassist William Parker, and trumpeter Stephen Bernstein.

Capello and Albert have made two recordings together under the Breakfast for Dinner label. They released “Duets 2014” in 2015. “New Normal,” which includes Parker, will officially release in March. Both are currently available on the label’s website.

Thursday’s noon performance will feature the duo by themselves.

The duo will join Cullars Improvisational Rotation, a jazz trio from Auburn, for two additional shows. On Thursday night from 5-8 pm Central Time, the combined group will appear for the “Jazz! Food! Art!” after-hours event at the Jule Collins Smith Museum of Fine Art.

Cullars is a jazz trio based in Auburn. It includes guitarist Dan Mackowski, saxophonist Patrick McCurry, and bassist Jason DeBlanc. It is the house band Thursday nights at the museum.

On Friday night, February 12, from 7:00 to 9:00 pm Eastern Time, Albert and Capello will join Cullars at The Loft in Columbus, GA. Food and drink are served at the museum and at The Loft, and neither will require admission.

“We’re a jazz group, but we like to move out of the normal jazz parameters sometimes,” said McCurry, who also coordinates A Little Lunch Music. McCurry said he played with Albert years ago before he was immersed in this new kind of music.

“He’s at a completely different level, now,” said McCurry about Albert’s music, adding, “I’m excited to play with him again.” But although his group members together have under their belts decades of improvising in jazz and other styles, McCurry is a little trepidatious about the Thursday and Friday night shows. “It’s sort of risky music,” he said.

Albert said what he and Capello play is completely improvised, with no preset agreements about the direction the music will take. He said he will bring in some of his own compositions for the combined performances. Those pieces include text instructions for each player and allow more control over the flow of the music.

Albert said it would be easy for newer players to defer to experienced ones, and has been in the same situation as Cullars will be. But he said the pieces, called “Instigation Quartets,” democratize the process a little bit. They ease the interactions without removing the feeling of free improvisation.