At noon on Thursday, February 18, the David Banks Gospel Jazz Ensemble will perform a free concert at Jule Collins Smith Museum of Fine Art, Auburn University as a part of the museum’s weekly series, “A Little Lunch Music.” The performance is being sponsored by Anonymous Friends of the Series.

A few years back, David Banks heard an older saxophonist play “Amazing Grace” at the Troy University jazz festival. The soloist was a featured artist for the event, skilled in his art, and Banks said the music really affected him. “It was so moving, the way he played it,” said Banks.

Afterwards, Banks said he went backstage and found the performer using a walker. They talked. Banks learned that the saxophonist, though talented, played a lot less than he wanted to. He had to depend on others to help him get to gigs. 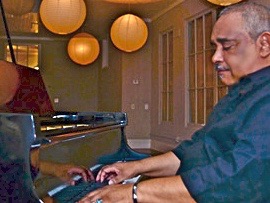 Banks is a 1999 graduate of Auburn University where he earned his doctorate in education. There he spent time as a graduate teaching assistant leading the AU Gospel Choir. Now, Banks teaches educational technology at Tuskegee. In his spare time, he leads and performs with the David Banks Gospel Jazz Ensemble.

Banks learned early on that Gospel and jazz have a lot in common. On his website, drdav.org, he wrote that the same conditions that gave birth to Gospel gave birth to jazz. “Both are uniquely American art forms,” he wrote, adding that they very often share the same musicians and the same listeners.

Banks said his meeting in Troy with the aged saxophonist inspired him. He decided to tailor a program for his group that would highlight seasoned and skilled musicians. The result was “Silver Lining,” a show which he described as, “Giving honor where honor is due, to the senior members of our society.”

Banks wants to develop the project into something that others can duplicate. His hope is for it to be a vehicle for musicians to continue to share their talents into old age. “It’s going to give seniors a chance to strut their stuff,” said Banks.

Banks said music is like anything else. As its performers age, they lose some of their technical abilities. But he said he believes musicians improve in other ways, namely in being able to put their heart into the music. “It’s definitely one thing that you get better at as you get older,” he said.

There are advantages to working with older people, said Banks. He said for the most part, they have learned how to get along with others and don’t get tied up in trivial details. Plus, rehearsals are easier to schedule. “Retired people can rehearse just about anytime,” he said.

And age has not diminished these performers’ concern for making good music, said Banks. He said the people on this project are intent on making the music the best it can be.

Banks said that part of the challenge for such a project is transportation, getting everyone where the music gets made. He said he and a friend are working on ways to address that problem so that these seasoned performers can continue sharing their talents with the world.

Banks said that Thursday’s program will feature performers each of whom have had over 45 years of experience. “If they’re going to do this, they have to be AARP certified,” he said.