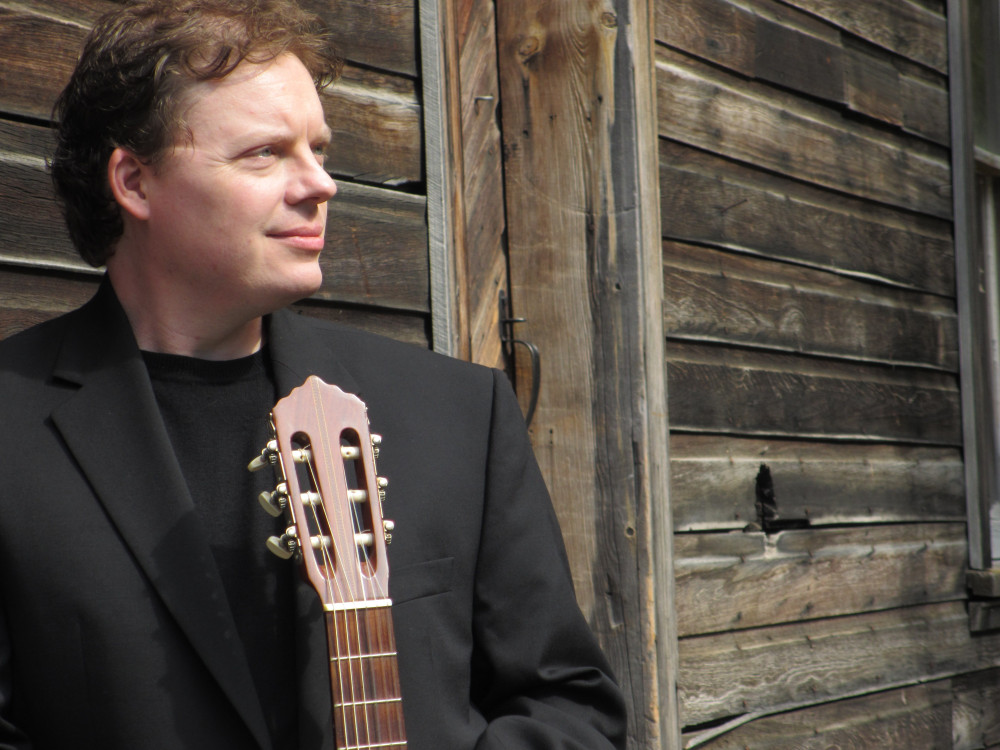 On Thursday, March 1, from noon to 1:00 pm in the auditorium, the series will present a free concert by classical guitarist Luther Enloe. The program will feature music by Luys de Narváez, Heitor Villa-Lobos, John Anthony Lennon, Nickitas Demos, Maximo Diego Pujol, and Stuart Weber. Thanks to gifts from Linda Anderson and from Anonymous Friends of the Series for helping to make this performance possible.

Click here for the event page on our calendar with more about the performer and the series’ full spring 2018 schedule.

A Hill Guitar Company Signature Artist, Dr. Enloe performs as soloist and with ensembles including the Georgia State University Symphony Orchestra and the Atlanta Philharmonic Orchestra. He has premiered music with the Vega String Quartet and Atlanta’s new-music ensemble, Bent Frequency.

The program will feature Renaissance music by Luys de Narváez from Spain, and Heitor Villa-Lobos who was a Romantic Period composer from Brazil. Music by living composers John Anthony Lennon, Nickitas Demos, Maximo Diego Pujol, and Stuart Weber will also be featured.

For Enloe, studying music began at age seven, when he and his father began taking trumpet lessons together. At age 11, Enloe got an electric guitar. He says he started taking guitar lessons to learn songs like “You Shook Me All Night Long” by the popular hard-rock band AC/DC.

He knew he loved music, and wanted to go to the Guitar Institute of Technology, a rock-and-roll college in Hollywood, California. But his parents could only support a college choice that was closer to home, so he chose the classical guitar major at Montana State University.

But in his sophomore year, Enloe made a commitment to himself to practice two hours a day. He says he fell in love with classical guitar. During the course of his studies, he met renowned guitar pedagogue John Sutherland. The two made a strong student-teacher connection, and soon after, Enloe moved to Georgia to study with Sutherland.

“I went from hating it to totally rearranging my life for it,” Enloe said.

He ended up earning Bachelor’s, Master’s, and Doctoral degrees from the University of Georgia studying under Sutherland. During that time, Enloe was able to study on several occasions with American virtuoso Christopher Parkening.

Now based in Atlanta, Enloe is on the music faculty of both Georgia State University and Emory University.

Composer Nickitas Demos also teaches at Georgia State and composed “Tonoi XI” for Enloe. The piece will be on Thursday’s program. Enloe says it is a very tocatta-like piece, meaning it is virtuosic, showing off the technique of the performer. Tocatta’s meaning is related to “touch.”

Demos is a clarinetist. Enloe said he worries about pieces for guitar written by non-guitarists. Without intimate knowledge of the guitar’s strengths and limitations, composers will often write music that does not flatter it or is even impossible to play. But Enloe was pleasantly surprised.

“A lot of it is surprisingly idiomatic,” Enloe said of “Tonoi XI.” He says one page of it was, in fact, unplayable at first, but a colleague suggested changing it to a slightly higher key. On guitar, what might seem like a small change, such as raising the music by a half step, can drastically change the movement and placement of the fingers. Enloe said it was the perfect solution, and now is one of his favorite things to play.

Much of composer Stewart Weber’s music is inspired by or interprets landscapes and scenes in nature. “He wrote really beautiful, really accessible music,” Enloe said. On Thursday, Enloe will perform Weber’s “The Missouri Breaks.”

The Missouri Breaks are an area that the U. S. Department of the Interior’s website describes as geologic layers that have been “folded, faulted, uplifted, modified by volcanic activity and sculpted by glaciers.” It is along the banks of the upper Missouri River in Montana, the state where Enloe grew up.

Enloe says he had been listening to Weber’s piece for twenty years before he decided to perform it. When he looked into finding the music, he discovered that Weber had grown up in Enloe’s same childhood neighborhood in Great Falls, Montana.