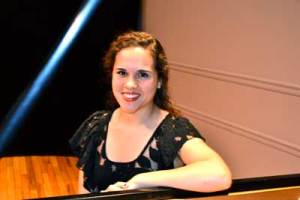 Spring 2014’s season of “A Little Lunch Music” opens Thursday, January 16 at noon with pianist Christina Fallows. The performance is being sponsored by Lynn Katz.

Christina is currently a senior at Auburn University studying piano performance under Dr. Jeremy Samolesky. She has studied piano for 15 years, and since middle school has competed on the instrument. Christina participates in the Auburn Community Orchestra, the university’s collaborative piano and chamber music performances, and is the pianist for Opelika High School’s show choirs. This summer she auditioned and won the opportunity to study music in an intensive six-week performance workshop in Vienna, Austria. She is a recipient, through audition, of Auburn University’s John Williams Tamblyn Endowment Scholarship in music. When not in the practice rooms, Christina maintains her own studio of young piano students. She is involved with Reformed University Fellowship and First Presbyterian Church of Opelika. Christina plans to pursue a master’s degree in Piano Performance.

Christina performed first for the series on a rainy day in October, 2011, with other students of AU piano professor Dr. Jeremy Samolesky. She was back again in April of last year. Christina is a senior this year. In the coming weeks, she will be traveling to three auditions for masters-degree programs. She’s preparing that music and will share it with us this week. We’ll hear music by Johann Sebastian Bach, Ludwig van Beethoven, Johannes Brahms, Alexander Scriabin, and Gabriel Fauré.

As a high school student, Christina was a National Hispanic Merit Scholar. She told me that she had never heard of Auburn before the school contacted her about applying for an academic scholarship. During her time at Auburn, Christina said she has met other National Hispanic Merit Scholars and felt a strong kinship with them. She said she likes the ethnic diversity of the piano studio.

At the same time, for Christina, coming to Auburn “was a little bit of a culture shock.” She hails from Austin, Texas, known for its vibrant art scene and progressive politics. But she said Dr. Samolesky was a good reason to come, and I can say from hearing her that she has progressed tremendously during her time with him.

On the program Thursday will be Scriabin’s Preludes nos. 9, 10, and 11, Op. 11. Speaking of diversity, Christina said she likes Scriabin because of that trait in his music, particularly in the Preludes. “It doesn’t sound like typical Scriabin,” she said, adding that she can sometimes listen to his music without knowing that he composed it. Her favorite on the program is Brahms’s Intermezzo, Op. 118, No. 5. She hears it as an extremely dark piece. “I have to make sure I’m in the right mindset for that piece,” she said.

A musician himself, Patrick McCurry coordinates “A Little Lunch Music” and occasionally performs for it. He blogs about the arts in our community.