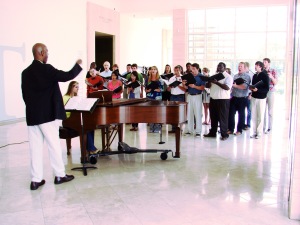 On Thursday, April 3, from noon to 1:00 PM, the Auburn University Chamber Choir will return to share a program with pianist Hunter Hayes. The Osher Lifelong Learning Institute at Auburn University is sponsoring the free concert. This is a member-led, member-driven organization for senior adults, 50 years and older. It offers courses that allow its members to learn, have fun, and socialize. For more about OLLI at Auburn visit www.olliatauburn.org or call 844-3105.

We love our performances in the Grand Gallery. The room’s design is regal, the view out over the pond is reflective, and the daylight pouring in through the windows makes us healthier. On Thursday, as sometimes happens, even the cathedralesque acoustics will elevate the experience, as the Auburn University Chamber Choir, directed by Dr. William Powell, will return. 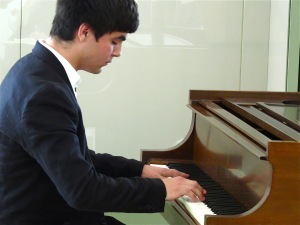 Sharing the program with the choir will be Auburn senior pianist Hunter Hayes. He has performed twice before for the series, and has written about the piece he will play. I’ve included that below.

Ravel’s Tombeau in Response to War

When Maurice Ravel began composing Le Tombeau de Couperin in 1914, World War I was just beginning. He could not have known he would end up dedicating each movement of his suite to friends who would perish while fighting in The Great War.

A tombeau was a popular musical form in the 17th century and it literally means “a piece written in memorial”. Although there were several famous musicians that bore the name Couperin in music history, Ravel dedicated this tombeau to Francois Couperin, a French Baroque composer affectionately known as “the Great”. Ravel would later say that this piece is not so much a tribute to Couperin as it is a tribute to the genre of the Baroque French keyboard suite.

When the piece was published in 1917, many criticized it as being irreverent, since the pieces are not as heavy as most works that commemorate the dead. Several of Ravel’s contemporaries, like Russia’s Sergei Prokofiev, were creating works that depicted the ugliness of war and were far from delicate. Nonetheless, when Ravel was asked why he chose to make Le Tombeau de Couperin lighthearted, he retorted “The dead are sad enough, in their eternal silence.”

It was an immediate connection for me with this work. I began studying it in Vienna, and the first movement always brings me back to the warm summer days I would leave my practice room to stroll down the same streets Mozart, Beethoven, and other music greats walked. The entire work is extremely colorful. I think that, to me, it is more a celebration of life than a reflection of death.

A musician himself, Patrick McCurry coordinates A Little Lunch Music and occasionally performs for the series and frequently with Cullars Improvisational Rotation Thursdays at the museum from 6 to 8 pm. He blogs about the arts in our community.