A Real “Monuments” Man and Plainsman

On January 14, 2014 I had the opportunity to hear a presentation by Robert M. Edsel , founder and chairman of the Monuments Men Foundation for the Preservation of Art and recipient of the National Humanities Medal.  I had first heard Mr. Edsel speak in January 2011 when the Jule Collins Smith Museum (JCSM) and the College of Architecture, Design and Construction (CADC) hosted his lecture at Auburn University.  Mr. Edsel has devoted himself for well over a decade to telling the story of the 345 men and women from thirteen countries who accepted the assignment to protect monuments and other cultural treasures from total destruction at the hands of the Nazis in the closing days of World War II.  This allied military group was comprised of educators, museum directors, curators, architects and artists who took on the overwhelming task of tracing, cataloguing and finally returning more than five million artistic and cultural items that had been taken by Hitler and the Nazis. It has been Mr. Edsel’s hope that by telling this heroic story we continue the legacy of the Monuments Men and take responsibility for the preservation of cultural treasures in current and future wars around the world. Of course, locating the hundreds of thousands of stolen and still missing works of art and documents from WWII continues to this day, as made evident with the recent discovery in a fifth floor apartment in Munich, Germany.

Mr. Edsel is the author of Rescuing Da Vinci, The Monuments Men: Allied Heroes, Nazi Thieves and the Greatest Treasure Hunt in History, and most recently Saving Italy.  He was also the co-producer of the documentary film, The Rape of Europa.  His work served to inspire George Clooney to write, direct and star in the film The Monuments Men which is scheduled for release on February 7, 2014. The film featuring Matt Damon, Bill Murray, John Goodman and Cate Blanchett has most likely taken necessary dramatic and artistic license with actual historical events but from all reports it is a great film that will further draw attention to this exceptional moment in history. 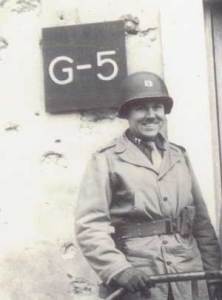 From a cursory look at the promos for the film it looks like shades of the story of Robert Kelley Posey will be included. Posey, a 1927 graduate of Auburn University’s Architecture program, plied his trade with a number of firms before entering the U.S. Army in 1942. By January 1945, Posey was serving as a Monuments Officer for General Patton’s Third Army, responsible for their area in France. In order to encourage the interest and foster an awareness of the historic cities of Nancy, Metz, Luxembourg and Trier where he and his troops were stationed, Posey wrote informative bulletins for the units’ men to read.

Pfc. Lincoln Kirstein was assigned as Posey’s assistant (Update: AP reports Monuments Men characters based on real people). Before joining the army, Kirstein had been one of the founders of the Museum of Modern Art and the New York City Ballet and has been described as “one of the most important influences in the development of American culture in the 20th century”. Together Posey and Kirstein discovered the Nazi Race Institute, filled with Torahs, Jewish archives and other stolen Judaic materials as well as the salt mine at Altaussee where they found thousands of art works that the Nazis had confiscated and purposely concealed including the Ghent Altarpiece by the Van Eyck brothers, Michelangelo’s Bruges Madonna and Vermeer’s Astronomer. For his extraordinary efforts Posey was awarded the Legion of Honor from France and the Order of Leopold from Belgium.

Following the war Posey went to work for the renowned architectural firm of Skidmore, Owings and Merrill in New York City. He served as part of the team for such distinguished projects as the Lever House and the Sears Tower.

Remembering the story of the Monuments Men and the work they did is important as we face continuing threats to our international cultural heritage. But I also hope that knowing that one of those unsung heroes was an Auburn University graduate makes the story all the more meaningful and appreciated. We at JCSM and Auburn University are most grateful to Robert Posey for the significant role he played in preserving our cultural legacy. I think he would be glad his university now has a museum of its own.

Read the book! See the movie! And visit JCSM!

Posey pictured above, courtesy of Monuments Men Foundation for the Preservation of Art