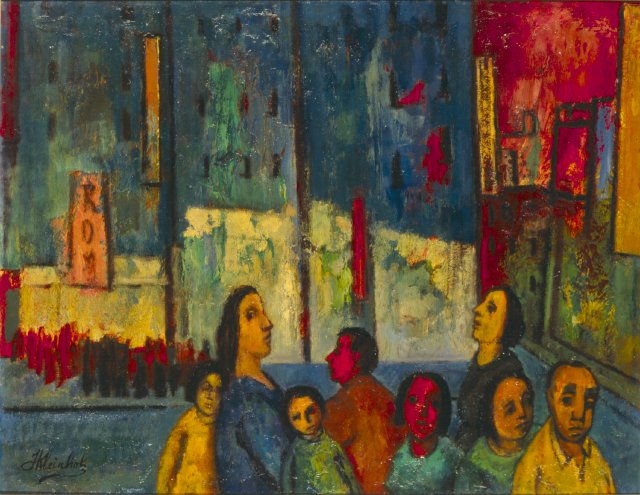 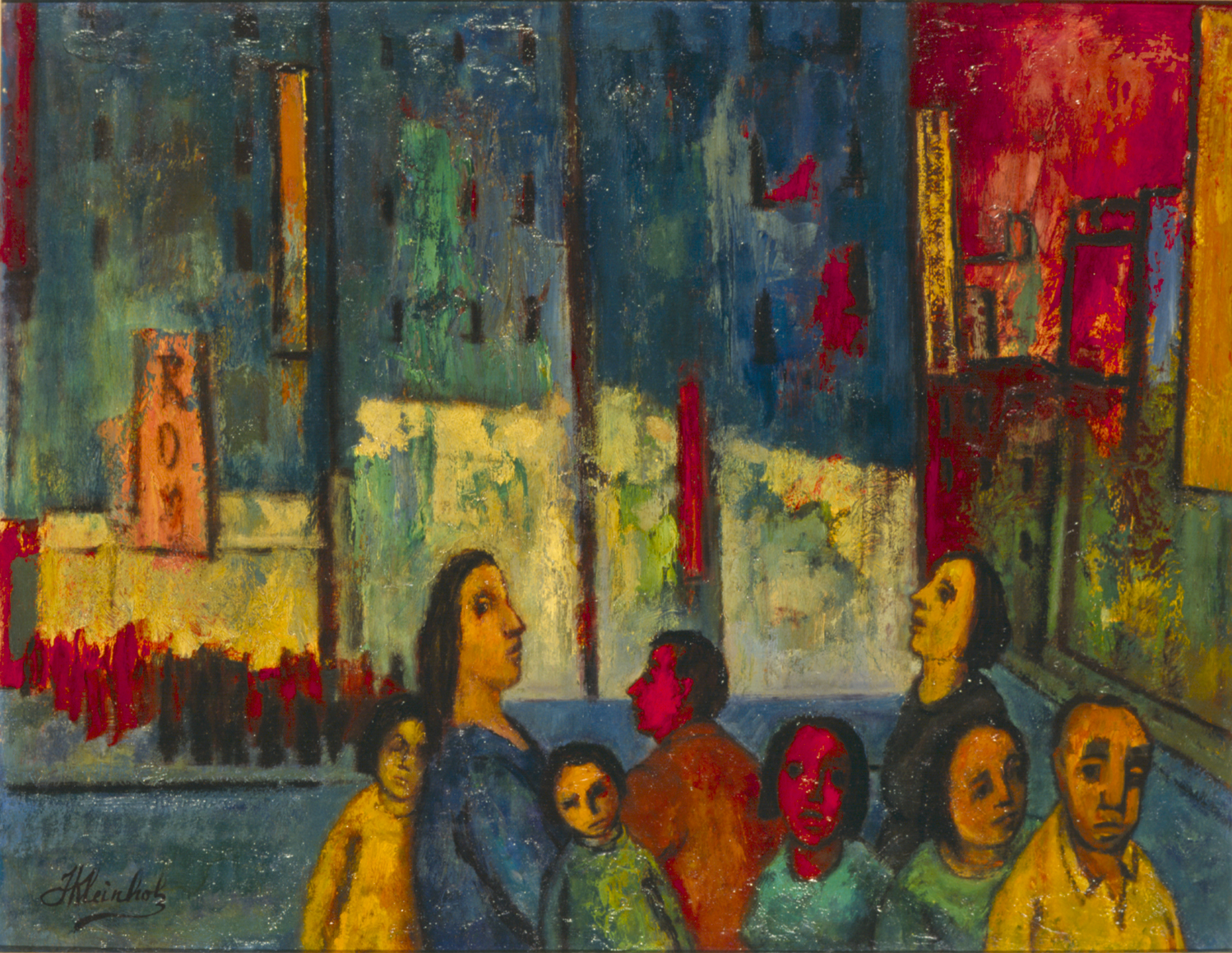 Based on the exhibitions featured at the museum during the 2015-2016 academic year and works from the permanent collection, students submitted written work responding to individual pieces of art experienced first-hand at JCSM. Entry was open to graduate and undergraduate students. Prizes of $500 were awarded for two academic essays and two creative submissions. For information on  the writing competition for the 2016-2017 academic year, contact Scott Bishop at 334-844-7014.

In the 1930’s, during the Great Depression, the term bank night referred to a popular lottery game used to bring crowds to movie theatres. These lotteries, created by Charles Yaeger in 1931, promoted the film industry during a time when the country was its poorest and people could not afford such luxuries. The lotteries were free to the public and involved some type of monetary prize given to the person whose name was pulled. The great depression was such a controversial time for a lottery of this nature which did not go unnoticed by those who saw the problematic nature of these practices.

Brooklyn born Jewish artist Frank Kleinholz (1901-1987) depicts this event in his painting, also titled “Bank Night”. The bright reds and yellows are alarming as they highlight the various facial expressions of the people seen in the painting. The emotions on their faces portray concern, fear, indifference, and a solemnness that engages the audience at first glance. With the known history of bank nights, one can assume that the scene of people in Kleinholz’s painting are waiting outside of a theatre or are coming from a theatre after participating in the lottery. The facial expressions are revealing of the attitude that many held in regard to these events.

During a time of great suffering, many people had nothing else to lose. Since the lotteries were free, it is clear to see why people would want to attend bank nights with the hopes of winning some type of prize or money to help support their families. Of course the purpose of bank nights was not to help people provide for their families, but to bring publicity to the film industry. Some people actually purchased movie tickets even though the lottery was free. This helped the film industry to have a source of monetary income through the latter years of the depression. Kleinholz’s painting shows us the controversial aspect of the bank night as well as the irony. With the given context of the cool blues in the painting’s background, which are buildings, it is appropriate that the setting of the painting is in the city, assumedly New York, where Kleinholz grew up.

Different scholars like Georg Simmel have analyzed the nature of the city which brings about the idea of the quantification of people through money. Money was scarce during the Great Depression, which meant people resulted to desperate means to obtain the money needed for their needs. This also meant that various industries resulted to equally desperate means to encourage people to spend the little money they did have. Georg Simmel discusses this quantification of people as money and their role in the city in his essay “The Metropolis and Mental Life”. According to Simmel, “[m]oney is concerned only with what is common to all, i.e. with the exchange value which reduces all quality and individuality to a purely quantitative level,” (12). Based on Simmel’s beliefs, individuals living in the city have a role that is strictly tied to wealth whether it be their own, a lack there of, or how they contribute to the wealth of another person, or the city itself. This idea suggests that the individuals seen in Kleinholz’s painting are more than just participants in a bank night, but are themselves quantities of the city. Each individual is merely a commodity in the city environment.

In the background of the “Bank Night” painting, the red strokes are representative of a crowd in the distance. The figures closer to the audience’s view possess body language in connection to the figures which are not as distinctly seen in the background. This relationship of figures enhances the dynamics of the facial expressions seen in the painting. One of the two red faces is a man looking back at the blurred figures. This suggests that the action that happens in the background in some way involves those who are distant from the other figures. As stated earlier, this could be that these people have left the lottery or are about to participate. The red faced man seems to embody a sense of longing as he is intrigued by the action in the background. This allows the assumption that Kleinholz suggests people during this time participated in bank nights out of curiosity or merely because they wanted to be a part of the relatively popular event. Noting the despairing looks of the yellow faces, there is also a suggestion of desperation. The depression put families out of their homes, men out of work, and ultimately annihilated many people’s life savings. This brought about a feeling of desperation, because people’s survival seemed to no longer be in their own hands.

Industries were well aware of this because they also struggled to maintain production and sales. People were still seen as commodities even though the economy drowned in debt. Industries had to be crafty in order to seduce the people of the cities into their money schemes: There needed to be a need. The one thing that people desperately needed is exactly what the film industry used for its own gain: money. Without money people could not hold on to their social status, which was of dire importance before and even during the Great Depression. Interestingly enough, this helped reduce the pressure brought upon by a society that revolved around social status. The depression created an equal opportunity for everyone to start over and rebuild their lives. Simmel explains this concept in terms of monetary value in the following quote: “They all rest on the same level and are distinguished only by their amounts. In individual cases this colouring of things, or rather this de-colouring of things, through their equation with money, may be imperceptibly small,” [sic] (14). Simmel places everyone on the same level with only their monetary value differentiating them. To some this may not have been a major issue, especially if they were already poor or lower class before the depression, or if they did not view money as a social necessity.

Simmel’s concept of coloring and de-coloring brings us back to Frank Kleinholz’s painting. Kleinholz uses primary colors throughout the entire painting with only a hint of orange to highlight the sign of the building attracting the blurred crowd and shades of a lighter yellow and green on the buildings in the background. Primary colors are the most basic colors outside of black and white on the color scale. More importantly, primary colors are needed in order to create any other shade of color. They are the base of all colors known to man. This is significant because during the Great Depression people within the city were just as important. Their labor and investments in the city is what caused the city to thrive and grow. Kleinholz could have used more secondary or tertiary colors, but instead he keeps a steady palate of primary colors that effectively create movement throughout the painting. Because of this color choice, no one area of the painting goes unnoticed, which indicates that every detail is important to the whole.

Furthermore, primary colors have the ability to create the color gray. Gray is the mixing of colors so that each component bends together to create a homogeneous shade. Gray is a dull color when compared to primary colors. If personified, the color gray could be categorized as passive, bland, or blasé. In his article, Simmel notes that people of the city maintain a blasé attitude that allows them to survive in a chaotic environment. Simmel says “[t]his incapacity to react to new stimulations with the required amount of energy constitutes in fact that blasé attitude which every child of a large city evinces when compared with the products of the more peaceful and more stable milieu,” (14). The children in the painting seen clinging to the woman, presumably the mother, have this same blasé demeanor that Simmel describes. This defense mechanism allows the blocking out of unwanted emotions and reactions. It is almost as if the children in the painting are unaware of what is happening although the facial expressions from the other figures reveal that something is indeed happening. This is mainly evident in the alarming red face of the woman in the center of the crowd of people. Simmel further defines this metropolitan blasé state in the following quote:

“Bank Night” capitalizes on the importance of money and the despair that it brings. To the person of the city, all interactions are disregarded and only money accounts for a meaningful interaction. The people in the painting are grouped together in reaction to the monetary exchange or the lack there of in relation to the bank night. They are one group, yet they are not homogenous. Their facial expressions allow the differentiation of their individual reactions and attitudes to their surroundings. The equal use of warm and cool colors gives a balance to the group of people, which does not allow any one or more persons to dominate the eye of the viewer. The same is seen throughout the painting as a whole. The eyes are drawn to the light shading in the background and then moves downward towards the people. They are the focus of the painting yet each element is important in conveying Kleinholz’s message. The light shading in the background follows a line that allows the eyes to move to the left to notice the blurred group of people that are a part of the background. Every shade of color and detail in the painting are used to direct the eye to the appropriate places. The painting can be seen as a “many membered organism” (Simmel 13). Each aspect is essential to the function of the whole.

The medium of the painting is another important aspect that must not be overlooked. It is oil on Masonite, which is a type of hardboard. Kleinholz could have chosen to do the painting on another material, but the hardboard speaks to the struggle of the Great Depression. Each element of the painting adds to the disparity of the life of the individual living in the city during this time period. The bank night, though perceived as an outing on the town, was actually another means of reinforcing the individuals in terms of their monetary value. The reaction to this, which is so eloquently depicted by Frank Kleinholz, shows a realistic perspective of those affected.

As an artist, Kleinholz often depicted images of the city through his work. “He grew up in the environment of the city; it has permeated his aesthetic soul and comes out of his pictures” (Freundluch 67). His work speaks for those who are often overlooked by other artists. He has been known as a painter who did not confine to the norms, but it is his work that has created its own path with its use of color and simplistic style. “Bank Night” is a representation of one of Kleinholz’s city paintings. He allows the painting to speak for itself without forcing his own opinion or biases. He is simply a passerby who watches and notices his surroundings, which translates in his works. Just as the nameless faces of the “Bank Night” painting watch and observe their surroundings, Frank Kleinholz was an artist who observed his surroundings and translated them into the paintings that are admired around the world today.