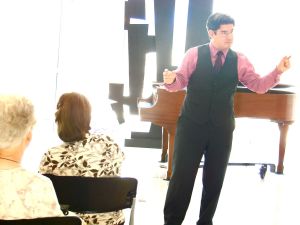 On February 27 from noon to 1:00 p.m. in the Grand Gallery, A Little Lunch Music welcomes pianist Josh Pifer. The originally scheduled program featured flutist Elizabeth Goode with Dr. Pifer. That has changed due to unforeseen circumstances. Instead, Dr. Pifer will perform solo pieces by W. A. Mozart (the “Twinkle Twinkle” variations), Dmitri Kabalevsky, Nikolai Medtner, John Corigliano, and Astor Piazzolla. Nick and Carolyn Davis are sponsoring this week’s free concert.

The last time Dr. Pifer performed for the series, he had just begun his stint as Piano Lecturer in the Auburn University Music Department. He opened 2011’s fall season with a program that included colorful and wonderful pieces, some by under-performed 20th-century composers.

This time around, Dr. Pifer will deliver similarly. Mozart and Piazzolla have appeared on the series before, but I’m pretty sure Kabalevsky and Medtner have not, and I’m almost positive we’ve not heard anything from still-living composer John Corigliano. I love hearing new music.

We will look toward rescheduling Dr. Goode, whose reputation precedes her. As it stands, however, Thursday’s program promises to be a great one.