On Thursday, March 20, from noon to 1:00 p.m. A Little Lunch Music will present the Nova Quartet, the Tiger Quartet and the Eagle Quartet. The groups are part of Auburn University’s saxophone studio led by Dr. Michael Pendowski. They will perform music by Scott Joplin, George Gershwin, David Maslanka, Eugène Bozza, and Bernard Heiden. One piece will feature timpanist Andrew Sykes. The concert, free to the public, is being sponsored by Richard & Mary Millman.

Thursday will be soprano saxophonist Sarah O’Keefe’s third performance for A Little Lunch Music. In 2011, she performed with the Auburn University Music Department’s sax quartet, put together by then saxophone instructor Russell Haight (rhymes with “Nate”). I’m pretty sure that he was Auburn’s first full-time saxophone teacher in over a decade.

Paige Lenssen and Orie Cecil played in that quartet, and they are returning to the series as well, in their own groups. In 2012, Dr. Michael Pendowski took over the sax studio. Now Auburn can field three saxophone quartets. As a saxophonist, I am thrilled.

The genre has grown in popularity over the years, and is now a staple in college music programs around the world. Professional groups are touring, winning competitions, and commissioning new works. It’s officially legit. I once even heard a national broadcast of a clarinet group doing a transcription of sax quartet music.

The saxophone being a relatively new instrument, transcriptions almost always go in the other direction. 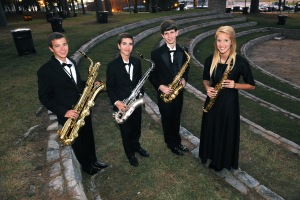 For instance, O’Keefe’s group, the Eagle Quartet, will play a transcription of George Gershwin’s Rhapsody in Blue, originally written for jazz band with solo piano. The piece is now famously known for its orchestral version that begins with a lilting clarinet solo and a long ascending glissando.

“It has a lot of ebb and flow,” said O’Keefe, referring to the frequent tempo changes. She said the synchronizations require a very high level of focused listening and working together.

O’Keefe is a senior studying zoology, but she came to Auburn in part on a music scholarship. “This is such an alternate universe to COSAM,” she said, referring to the style of work in the College of Sciences and Mathematics. She enjoys the different kind of reward that music, especially small-group (or “chamber”) music, offers. 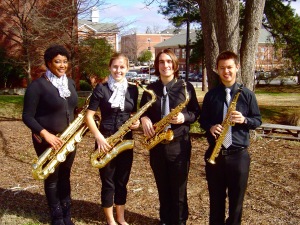 Lennsen, a tenor saxophonist primarily studies finance and writing, but said she returns to the music, “just because I love to play.” Her group, the Nova Quartet, will perform Bernhard Heiden’s Four Movements. Heiden (not Haydn, but pronounced the same) was also a twentieth-century composer, but his music is very different from Gershwin’s.

“Last semester, we focused on romantic, sort of easy-on-the-ears pieces,” said Lenssen. But she said that the Heiden is more challenging, and more difficult rhythmically. It adds another level of intricacy by featuring a timpani part, played by percussionist Andrew Sykes.

A senior, Lenssen joins freshmen and sophomores in her group. “We have some great younger talent,” she said. 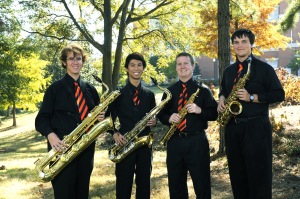 Other pieces on the program will be four movements of still-living composer David Maslanka’s Mountain Roads, twentieth-century composer Eugène Bozza’s Nuages, three Gershwin preludes, and Ragtime Suite arranged by Arthur Frackenpohl that includes music composed by Scott Joplin and others.

Pictured top to bottom: the Eagle Quartet, the Nova Quartet, and the Tiger Quartet.