Bring Your Friends (and the Weekend) a Little Closer

The Museum Café transforms night side with expanded entertainment as well as tapas, beer, wine and specialty cocktail menus. The jazz riffs of Cullars Improvisational Rotation fill the air on  beginning at 6:00 pm. Galleries are open until 8:00 pm, so there’s time to see what’s on view. 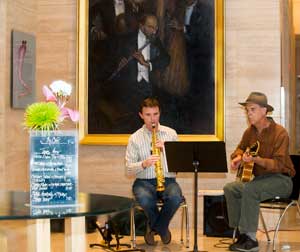 McCurry’s music crosses boundaries between jazz and classical, pop and art, secular and sacred. He holds a Masters degree in Chamber Music Performance from the University of North Carolina School of the Arts and studied jazz improvisation, composition and arranging while earning his undergraduate degree from Loyola University New Orleans. McCurry coordinates the popular “A Little Lunch Music” series and blogs about the arts in the community. Mackowski has been part of Auburn, Alabama’s jazz scene since arriving in 1990. He was part of the Auburn Knights Orchestra from 2001 to 2004 and now arranges pop and big band tunes for solo fingerstyle guitar. Like many of his generation, Dan became fascinated with the guitar after seeing the Beatles on the Ed Sullivan Show. He played in rock bands while pursuing degrees in physics and mechanical engineering. Now, Dr. Mackowski is Associate Professor of Mechanical Engineering at Auburn University. He teaches courses in thermodynamics and energy-related science and researches the mathematical description of electromagnetic wave scattering.

The Museum Café’s tapas menu ranges from seven to 10-dollars, and the portions are meant for sharing; so, bring your friends (and the weekend) a little closer with a night on the town at your museum.

Please note: The Museum Café will be closed Thursday, March 27, for a private event from 5 to 8 pm. We regret any inconvenience. Tapas service and regular featured performance by Cullars Improvisational Rotation will resume April 3, 2014.