By Communications and MarketingDecember 13, 2017News, Uncategorized 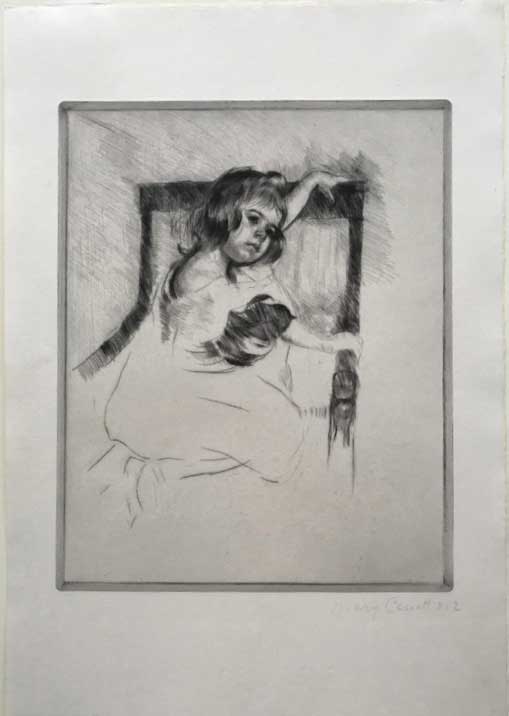 Mary Cassatt was born into a family of wealth and privilege who objected to her aspirations of becoming a professional artist. In spite of this lack of familial support, Cassatt today is recognized as one of America’s most significant masters of the late 19th and early 20th century. As an ex-patriate she is credited with influencing and shaping American art tastes as evidenced by the Havemeyer Collection of Impressionism now in the Metropolitan Museum of Art in New York.

At the early age of fifteen, Cassatt began her formal studies at the Pennsylvania Academy of the Fine Arts in Philadelphia but she was disappointed in the limited instruction she received as a female student. In 1866, she persuaded her mother to move with her to Paris where she continued her studies under the private tutelage of Jean-Léon Gérôme and later Thomas Couture. By 1868, she had a painting selected to be in the Paris Salon, but it would be another decade before Cassatt would find her true artistic identity among the Impressionists, that infamous group of painters that defied academic tradition. Her introduction to the group came through Edgar Degas, who encouraged Cassatt to explore other media such as pastel and intaglio printmaking on copper plate (which she was first introduced to by Carlo Raimondi in Parma, Italy in 1872). Over the next few decades she would become extremely skillful and innovative at both mediums.

During her years in Paris, Cassatt’s extended family was a constant presence and were the subject of several of her paintings. Many of these images include her closely observed treatments of a mother and child, for which she became known. She did not over-romanticize these images, but focused instead on the individuality and temperament of her subjects.

“Kneeling in an Arm Chair is an exceptionally fine, early impression of this drypoint image from 1903, which features Margot, the daughter of Reine Lefebvre who lived near the artist’s summer home, Chateau de Beaufresne at Mesnil-Theribus in Oise,” said Marilyn Laufer, director, Jule Collins Smith Museum of Fine Art. “Both mother and child often sat for Cassatt. There is undoubtedly an ease and familiarity with her young subject, which enabled Cassatt to capture that fleeting moment when the child paused to consider something outside the picture frame. Her gaze is wistful, but in an instant, we know that her impatience will return and she will resume her childlike perpetual motion.”