Conserved Murals to Exhibit for First Time in Museum Setting 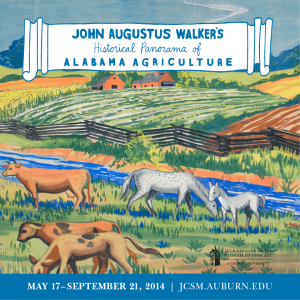 Jule Collins Smith Museum of Fine Art, Auburn University will exhibit John Augustus Walker’s “Historical Panorama of Alabama Agriculture” from May 17, 2014 to September 21, 2014. The exhibition is timed with the 100th anniversary of the Alabama Cooperative Extension System and marks the first time the entire series of ten paintings will be exhibited in a museum setting. Curated alongside “Panorama” and running concurrently are other WPA-era art from the museum’s permanent collection in “Picturing an Era: Art from the Great Depression to the Second World War.” Prominent artists represented include Marsden Hartley and Grant Wood, alongside regional artists such as Frank Applebee, Edward Everett Burr, and Nell Choate Shute.

On May 22, 2014 at 5:00 p.m., Bruce Dupree, art director with the Alabama Cooperative Extension System, will present a gallery talk entitled “The Historical Panorama of Alabama Agriculture, John Augustus Walker, and the 1939 Alabama State Fair.” The jazz band Cullars Improvisational Rotation will perform following the talk from 6:00 to 8:00 pm with extended gallery hours and tapas with cocktail service in the Museum Café from 5:00 to 8:00 pm. Admission is free courtesy of JCSM Business Partners.

Dupree said that in the 1930s, the Extension Service was a major player on the state’s agricultural and political stage. “As in years past, in 1938 fair organizers contacted the Extension Service and Alabama Polytechnic Institute to have a large exhibit at the upcoming Alabama State Fair,” he said. “Once a theme was decided, Extension leaders sought an artist through the regional Works Progress Administration, or WPA.” Dupree said that Mobile mural artist John Augustus Walker, who also worked as a Mardi Gras float and costume designer, graphic designer, and full-time railroad clerk, was selected and worked closely with the Extension on mural content.

Walker’s ten-panel “Panorama” looks back to the area’s Native American first farmers and culminates with modern advances in farm technology and its benefits. “Much like a stage set, the murals were designed to only last for a short period of time, about two weeks,” said Dupree. “The next year would likely bring a new design.” By the early 1940s, the murals were lost and forgotten. “Americans’ thoughts were turning from domestic issues to world headlines, such as the war in Europe. With advancing technology, the message of the murals became outdated.”

The murals were rediscovered in the early 1980s in the Duncan Hall attic. “The murals were in bad shape when found,” said Dupree. “Recent conservation treatment has stabilized the paintings’ fragile areas and cleaned years of accumulated dust and dirt, thus ensuring a long life for these ‘temporary’ works of art,” remarked Dennis Harper, museum curator of collections and exhibitions. In 2010, the murals were transferred into the permanent collection of Jule Collins Smith Museum of Fine Art.

In one of the panels, Walker used the header “Farm Progress is Great.” Dupree said Alabama agriculture has changed much since 1939. “Poultry, forestry and aquaculture are leading industries, creating tens of thousands of much needed jobs in many rural counties. He cited other positive changes such as disease and drought resistant crops, agri-tourism, and long-range weather forecasting among the many advances. But much of what farmers grow, he said, is the same. “As in the 1930s, it still takes planting a seed, nurturing what we grow, and stewardship of the land and water. And, a good rain now and then doesn’t hurt either.”