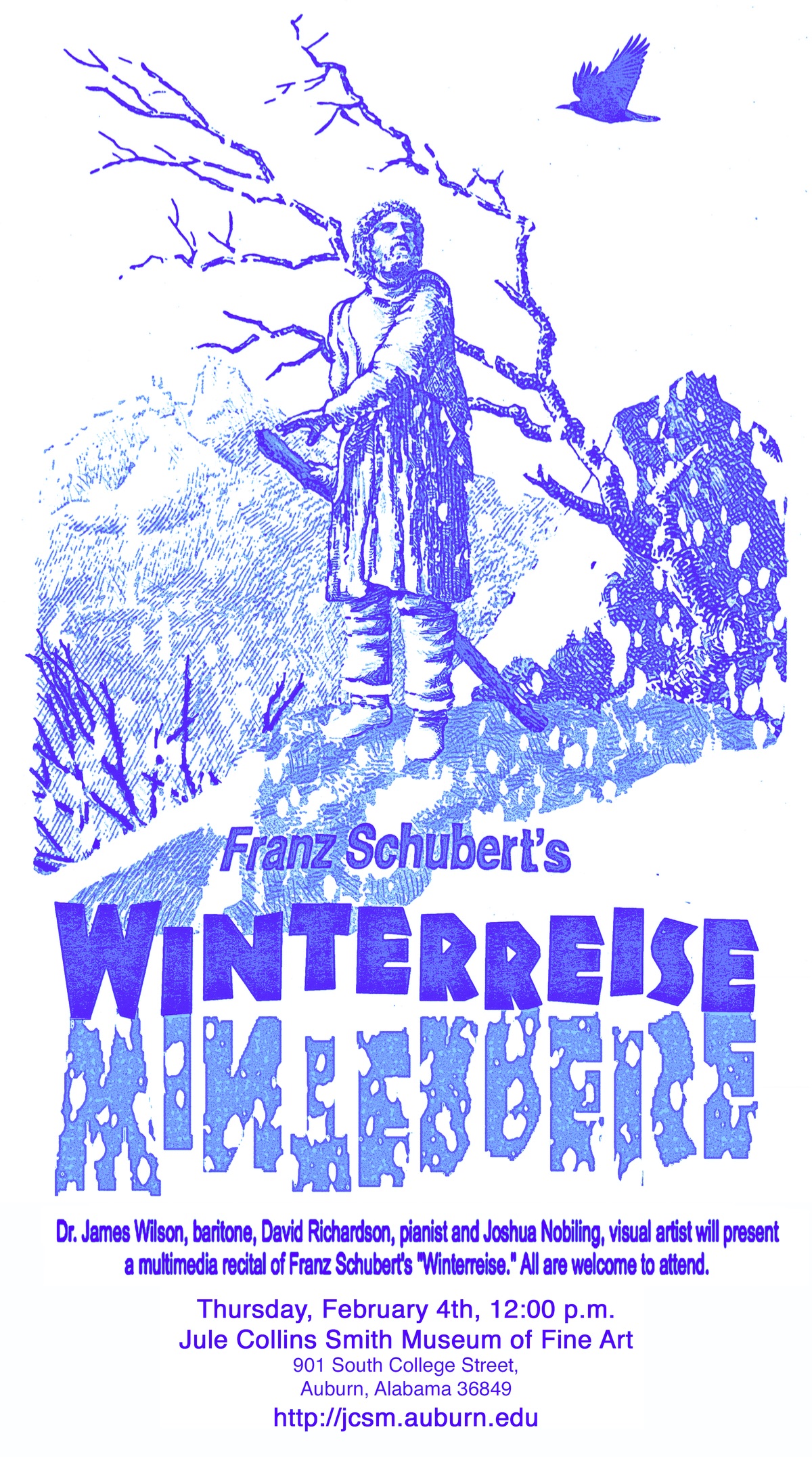 On February 4 from noon to 1:00 pm in the Auditorium, A Little Lunch Music will present baritone James Wilson and pianist David Richardson performing a free concert that will feature the art of Joshua Nobiling. Mr. Nobiling will be present for the event. Music for the multimedia presentation will be Franz Schubert’s Winterreise. The concert is being sponsored by Bill & Josie Walsh and Nick & Carolyn Davis.

In the fall of 1827, two months before he died at the age of 31, Franz Schubert completed his third and final song cycle titled Winterreise (A Winter’s Journey). Several years earlier, Schubert had come across a book of poetry containing Wilhelm Müller’s poetic cycle titled Der Winterreise (Schubert dropped the article). Through the lense of history it is easy to see why Schubert was attracted to this set of dark, wintry, and existential poems. In 1823, Schubert contracted syphilis and was hospitalized for an extended period. He was able to make a slight recovery, but he had nevertheless contracted a terminal disease. In 1824 he wrote,

“Imagine a man whose health will never be right again, and who in sheer despair over this ever makes things worse and worse, instead of better; imagine a man, I say, whose most brilliant hopes have perished, to whom the felicity of love and friendship have nothing to offer but pain at best, whom enthusiasm for all things beautiful threatens to forsake, and I ask you, is he not a miserable, unhappy being? … each night, on retiring to bed, I hope I may not wake again, and each morning but recalls yesterday’s grief.”

Dr. James Wilson is an Associate Professor of Music at Wesley College where he directs the College Choir and teaches courses in the areas of Music History, Ear Training, and Conducting. He is an active conductor and choral arts advocate in the state of Delaware, serving as the Artistic Director of the Delaware Choral Society, Artistic Director of the Kent Chamber Choir, state representative for the national board of NCCO (National Collegiate Choral Organization), and as the chair of college and university choirs for Delaware ACDA (American Choral Directors Association). He holds degrees from The Hartt School (B.M.), Boston University (M.M.), and the University of Nebraska – Lincoln (D.M.A.) 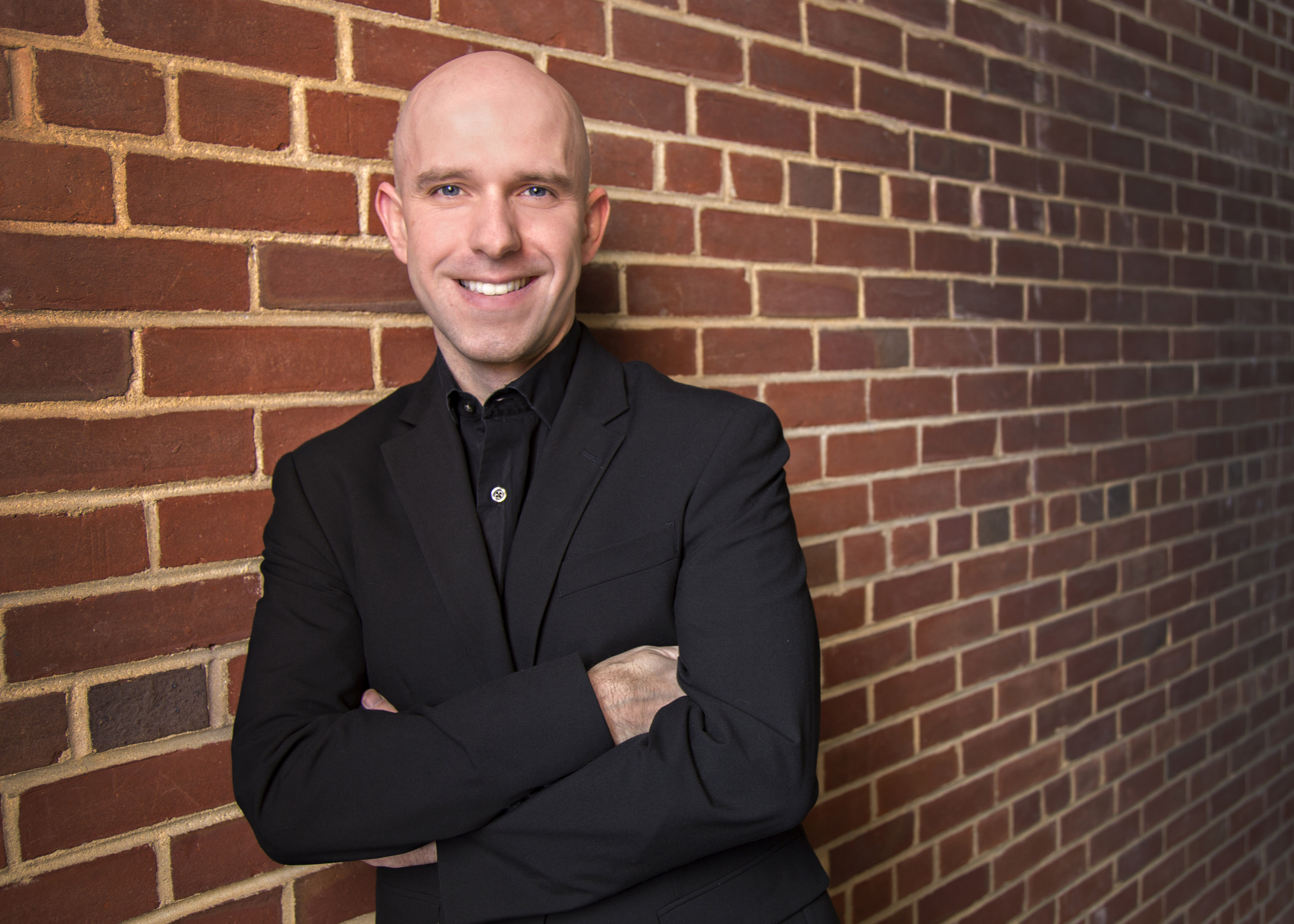 A native of Newburyport, MA, pianist and conductor David Richardson is in his fifth year as a coach/accompanist at Viterbo University in LaCrosse Wisconsin. During his time at Viterbo, Mr. Richardson has accompanied numerous student, faculty, and guest artists recitals, as well music directing and conducting Viterbo University opera productions for the Bright Star Season, the Chamber Opera Series, and productions in Viterbo’s new Weber Center for the Performing Arts. Active in the La Crosse community, Mr. Richardson served as music director for the UW-L Choral Union for three years, performing such works as Mozart’s Requiem, Honneger’s King David, and Bach’s St. John Passion. He currently serves as an assistant organist and choir director at Our Saviors Lutheran Church. 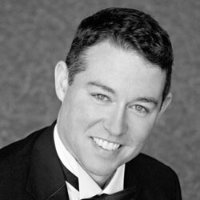 Joshua Nobiling is an Adjunct Professor of studio art at Wesley College where he teaches courses in Painting, Drawing, and Printmaking. He is also an Adjunct Professor at the University of Maryland Eastern Shore where he teaches Art Appreciation. Mr. Nobiling is, first and foremost, an active studio artist working in painting, printmaking, drawing, sculpture, and digital media. A selection of his drawings were recently included in a drawing exhibition in New York City’s Greenpoint Gallery. Joshua is also the owner and operator of the small sculpture studio ‘Vulture House Studio’ which specializes in small grotesque statuaries that are sold to private collectors in Salem Massachusetts, and San Juan Capistrano California. He holds degrees from Southern Illinois University Carbondale (B.F.A.), and the University of Delaware (M.F.A.). 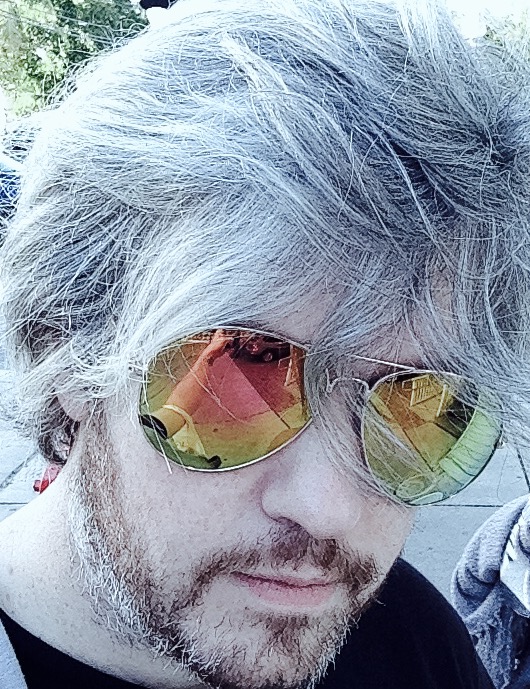