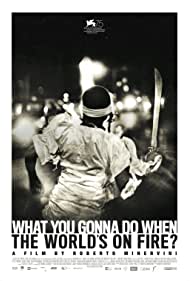 A screening of “What You Gonna Do When the World’s on Fire?” (2019), by director Roberto Minervini.

“What You Gonna Do When The World’s On Fire”is the story of a community of black people in the American South during the summer 2017, when a string of brutal killings of black men sent shockwaves throughout the country. A meditation on the state of race in America, this film is an intimate portrait into the lives of those who struggle for justice, dignity, and survival.

Roberto Minervini is an Italian-born film director, who lives and works in the US. After completing a Master’s Degree in Media Studies at The New School University in New York City in 2004, he moved to the Philippines to teach Documentary Filmmaking at a University level. In 2007, he moved to Texas, where he directed three feature films, THE PASSAGE, LOW TIDE and STOP THE POUNDING HEART, a Texas trilogy that was presented and awarded at some of the most renowned film festivals in the world such as Cannes, Venice, Toronto, and Rotterdam, among others. In 2014, STOP THE POUNDING HEART won the David di Donatello Award (Italian Academy Award) for best documentary. THE OTHER SIDE (aka LOUISIANA), his fourth film, premiered at the 2015 Cannes Film Festival, competing in the Un Certain Regard section.