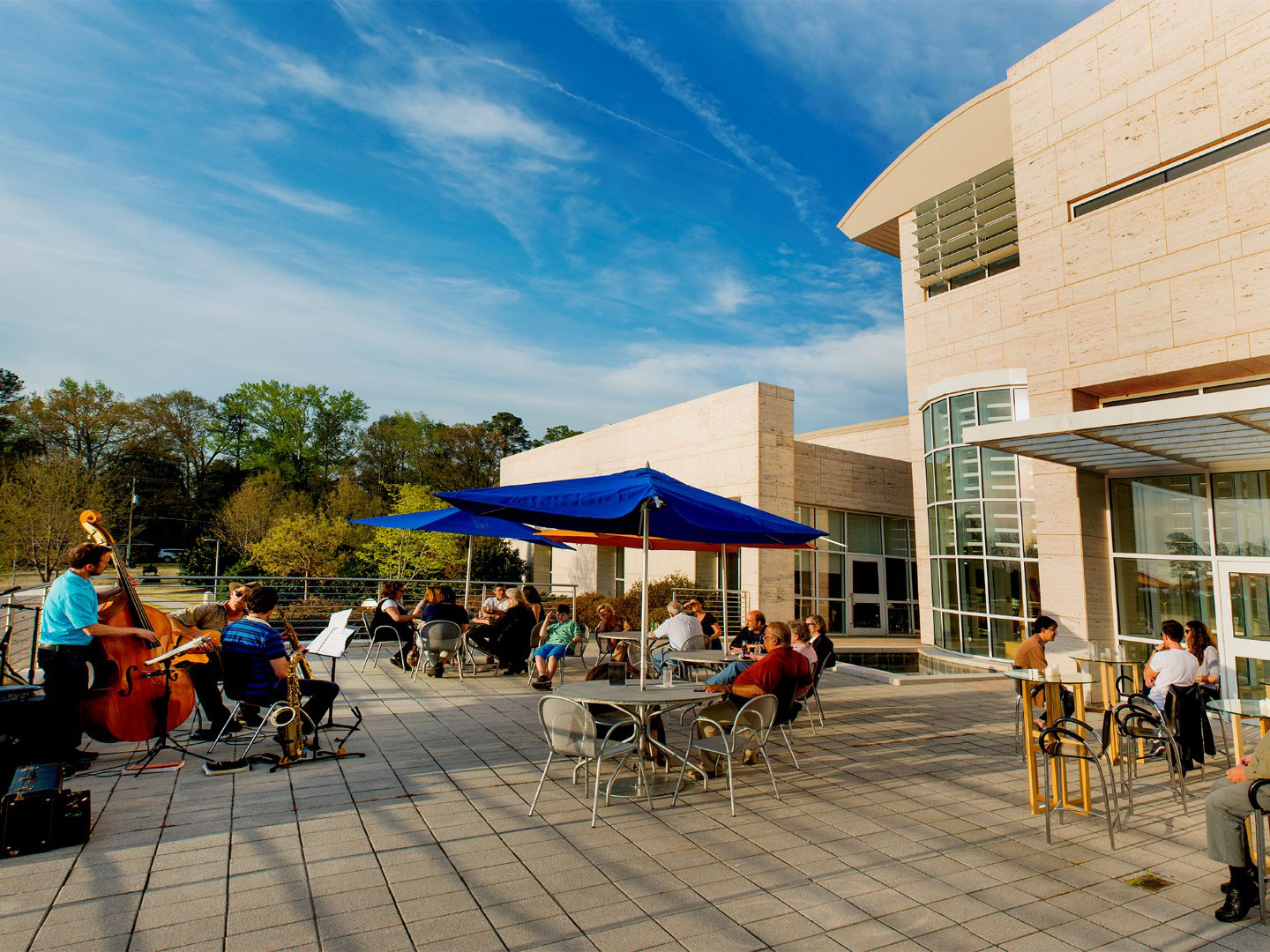 On Thursday nights from 5 to 8, the rotunda and cafe (and when the weather’s nice, the terrace) become JCSM After Hours. It’s the perfect place for relaxing, watching the sunset, and listening to music. Hear original songs, jazz, classical, cultural, and sometimes adventurous music fill the pristine spaces at the Jule Collins Smith Museum of Fine Art, Auburn University.

The house band at JCSM After Hours is CULLARS IMPROVISATIONAL ROTATION. Made up of Dan Mackowski (guitars), Patrick McCurry (woodwinds), Jason DeBlanc (basses), and guests, Cullars is a jazz trio with a southern sensibility: thoughtful, ambient, and adventurous. Named after the oldest soil fertility study in the South, the group embraces its roots and promotes new growth through delicately rehearsed arrangements of standards, originals, hymns and improvisations.

Cafe service is available with food and drink by Ursula’s Catering, the fine art exhibitions are open and free to the public, and the gift shop is open.

JUNE 30 – The JANE DRAKE TRIO, led by jazz vocalist Jane Drake (on Facebook), is the house band at Eighth and Rail’s Tuesday-night jazz jam in Opelika. Jane started singing with the Auburn Knights Orchestra while a student at Auburn. For the next 15 years, she sang in venues throughout the southeast, from New Orleans to the Florida and Mississippi beaches. In 2006, she appeared on Georgia Public Broadcasting’s The Jazz Spot in conjunction with the release of her CD, Brand New Woman.

JULY 7  – Café is closed and the music will take a break.

JULY 21 – R2DUO/BUBBLES AND THE WHALE

Flutist Rachel Nozny and guitarist Robert Gibson formed R2Duo in the spring of 2014. In addition to performing the standard flute and guitar repertoire, R2Duo also specializes in contemporary literature and enjoys working with living composers on the creation of new works. The mission of R2Duo is to be a versatile and creative ensemble that brings a high level of artistry and musicianship to many styles of music. Rachel Nozny and Robert Gibson are both faculty members in the John M. Long School of Music at Troy University and each enjoy active careers as educators and performers in South Alabama and its surrounding areas. In 2016, R2Duo was selected to perform at the National Flute Association conference in San Diego.

Bubbles & the Whale is the alter-ego of R2Duo, and insists on corrupting music to its funnest form. “Singing” music from Édith Piaf to Nirvana, B&W bring a unique perspective to many songs you thought you loved. Contrary to DuoR2’s artistic mission, B&W just want to have fun, even though one of them is a guy.

Nozny and Gibson are both faculty members in the John M. Long School of Music at Troy University. Each enjoy active careers as educators and performers in South Alabama and its surrounding areas.

Trained in classical and semi-classical traditions of North Indian music, Dr. S RAJ CHAUDHURY is the founding director of the ensemble, which was started in Fall 2010. His training is in the classical musics of North India with a focus on the music of Rabindranath Tagore. He has led similar music ensembles while a doctoral student at University of California, Los Angeles; at Christopher Newport University in Virginia; and within Indian cultural groups wherever he has lived in the United States. A vocalist by training, Dr. Chaudhury plays harmonium, tabla, and tanpura. In 2015, Chaudhury joined the Office of the Provost at Auburn University as Special Assistant for International Programs and Auburn Online. He previously served as Associate Director of the Biggio Center for the Enhancement of Teaching and Learning. His academic training is in Physics and Physics Education.

The AUBURN INDIAN MUSIC ENSEMBLE comprises students in a semester long class where they learn fundamentals of Indian classical and semi-classical music. The students in the group come from varied musical, educational and cultural backgrounds and thus bring a rich diversity of experiences with them. This music is based on the system of ragas (melodies) and talas (rhythms). The vocal performances of the group feature a variety of traditional instruments such as harmonium (organ), tabla (drums) and tanpura (drone). Bansuri (bamboo flute), sitar (six-stringed lute) and veena (South Indian lute) are instruments that are featured in the group’s compositions. More about the group is at auburnsangeet.wordpress.com.

AUGUST 4 – RUSTY TAYLOR fronts the band SOUTHERN STANDARD TIME and describes himself as “a hemp-inspired quadriplegic jester disquised as a jazz-singing poet and writer.” On April 18, 1986, he broke his neck in a single-car accident that left him a quadriplegic, unable to perform even the most rudimentary acts of daily living. Since then, he graduated from Mercer University with a BA in English and a minor in Computer Science. For sixteen years, he worked for a global corporation as a computer programmer. Certain events made it very easy for him to break from that career to pursue his dream of singing jazz. His first CD, “Southern Standard Time,” has received air time in The Netherlands, Texas, and on Georgia Public Radio. Rusty writes poetry, lyrics, essays, short stories, is working on an autobiographical manuscript, and has penned a novel entitled, “Wild Earth Zone,” that he calls a futuristic satire. His blog at southern-standard-time.com is a chronicle of his journey into the realm of jazz as a quadriplegic. He often appears at The Loft in his hometown of Columbus, Georgia, and is known at jam sessions throughout the region.

AUGUST 11 – MARTHA’S TROUBLE – Founding band/soul mates Jen and Rob Slocumb met 19 years ago with a twist of fate inside a Houston, Texas, coffee shop where Jen worked booking bands. Rob was home to see his parents after a music venture fizzled. It started as a simple bond over music. Time led them to realize it was something much more. The two fell in love and were married.

They continued to write and play music, building up enough of a repertoire to start producing albums and touring around the country and the world. Their work has not gone unnoticed. Some of the most influential and well-respected music critics of our time have paid tribute to the duo. They have been listed and featured in Billboard Magazine, USA Today, AOL Music, XM Satellite Radio and Performing Songwriter. Their songs have received awards and have been featured in made-for-TV movies shown to national audiences.

And all of it is part of a dream that is still in the works. A dream that Jen and Rob keep on dreaming. The duo now lives in Auburn, AL. Not exactly where they pictured themselves, but they wouldn’t give it up. Jen, from Ontario, Canada, and Rob, from Nashville, TN, are sure they’re where they are supposed to be. Everything the couple has done has been in pursuit of a musical dream, one that, so far, has paid off.

Music continues every Thursday evening throughout the year unless otherwise advertised.