An event every month that begins at 6:30 pm on day Third of the month, repeating until November 19, 2015 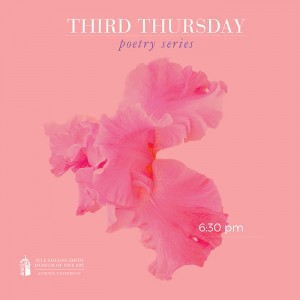 A new lineup of visiting poets to our area is slated for the fall 2015 installment of the Third Thursday Poetry Series. Once again, faculty designers from Auburn’s College of Architecture, Design and Construction created eight broadsides that represent works by each of the poets participating in the series. A limited number of prints and sets will be available for sale in the Museum Shop, as well as online. The Third Thursday Poetry Series is made possible by grants from the Alabama State Council on the Arts and the National Endowment for the Arts.

Enjoy tapas, beer, wine, and specialty cocktail menus from the Museum Café from 5 to 8 pm. Prices range from $7 to $10, and the portions are meant for sharing.

August 20 @ 6:30 pm – 7:30 pm
Negative Capability Press presents a reading from its new anthology of Georgia-inspired poetry, Stone River Sky. The editor, Carey Scott Wilkerson, and associate editor, Melissa Dickson, spent a year collecting and assembling this poetic vision of Georgia as a place, as an idea, and as an expressive motif. Stone River Sky is thus both a literary artifact and a celebration of the many voices in the polyphony of Georgia poetry. Indeed, the anthology’s scope is regional, national, and international with contributors from across the United States, even Europe, and Asia. Wilkerson and Dickson will join a cast of distinguished poets reading their own works and selection from Stone River Sky. Among the guest poets will be: Sue Walker, Andrea Jurjevic, Nick Norwood, Chad Davis, Greg Fraser, Russell Struer, and others. Copies of this anthology will be available for purchase and signing. Because this is a group reading, there will not be an open mic segment this time.

September 17 @ 6:30 pm – 7:30 pm
Robin Behn is Professor of English and teaches in the MFA Program in Creative Writing at the University of Alabama. Her books of poetry are Paper Bird, winner of the Associated Writing Programs Award Series in Poetry; The Red Hour, Horizon Note, winner of the Brittingham Prize, Naked Writing, and The Yellow House. She is also co-editor of The Practice of Poetry: Writing Exercises from Poets Who Teach and editor of a new anthology of creative writing exercises for young writers, Once Upon a Time in the Twenty-First Century, forthcoming from University of Alabama Press. A recipient of fellowships from the Guggenheim Foundation, the National Endowment for the Arts, the state arts councils of Illinois and Alabama, and the New England Review narrative poetry prize, her work appears in the Pushcart Prize anthology, Best American Poetry, and many literary journals.

October 15 @ 6:30 pm – 7:30 pm
Richard Tillinghast is the author of twelve books of poetry and four of creative non-fiction. His poems have appeared in the Atlantic Monthly, Paris Review, The New Yorker, and Poetry, among many other journals. His most recent poetry collections are Wayfaring Stranger and Selected Poems. He has translated Turkish poetry, written reviews for New York Review of Books, and published travel writing about Turkey and Ireland, where he lived for five years. He was a 2010-11 Guggenheim Fellow in poetry. He previously taught at Harvard University, Sewanee, University of California Berkeley, and the University of Michigan. Now retired, he divides his time among Tennessee, Hawaii, and California.

November 19 @ 6:30 pm – 7:30 pm
John Hoppenthaler’s books of poetry are Anticipate the Coming Reservoir, Lives of Water, and Domestic Garden. His poetry has appeared in many journals, anthologies, and textbooks, including Ploughshares, Virginia Quarterly Review, Southern Review, Christian Science Monitor, Southeast Review, and West Branch. Among his honors are an Individual Artist Grant from the West Virginia Commission on the Arts, grants from the New York Foundation on the Arts and New York State Council on the Arts, and residency fellowships from writer’s colonies.