By Communications and MarketingApril 22, 2019 News 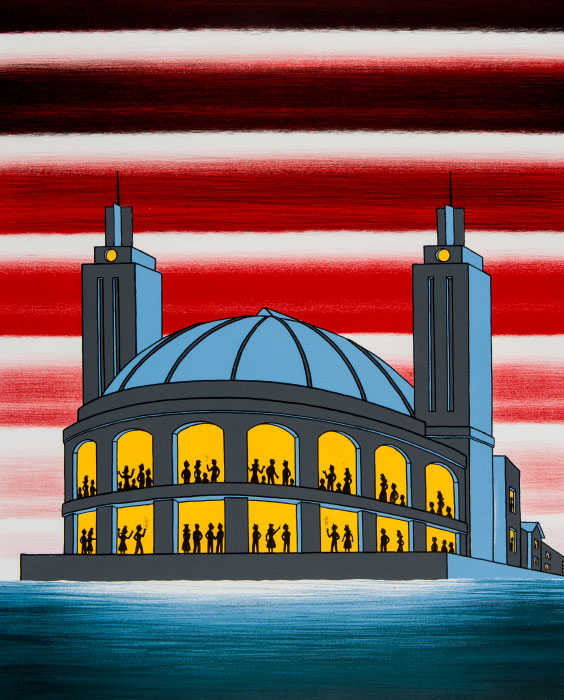 AUBURN, Alabama — A new exhibition of contemporary artwork from two of Alabama’s favorite sons, artist brothers Roger and Greg Brown, is opening at the Jule Collins Smith Museum of Fine Art at Auburn University on Thursday, May 2. Exhibiting through Nov. 3, “Creative Cadences: Works by Roger and Greg Brown” features a provocative, eclectic variety of paintings, prints, sketches and sculptures by prolific Chicago Imagist Roger Brown and the printmaking, drawing and papier-mâché works of Montgomery-based visual artist and author Greg Brown.

The Brown brothers, who were raised near Auburn in neighboring Opelika in the 1940s and 50s, both showed significant creativity at an early age. Their parents encouraged this inclination, supporting Roger and Greg with private art lessons during their formative years.

“We were both tutored by Loneta Mason, the wife of Sam Mason, who was the football coach at Opelika High School,” Greg Brown said. “We received lessons from grade school all the way into high school.”

Roger Brown, six years older than Greg Brown, is described by his brother as someone who was very outgoing, attracted many friends, and always seemed to be engaged in an artistic preoccupation, from model-making to photography to theater.

“Roger’s passions resonated with me strongly growing up,” said Greg Brown. “He influenced me by his desire to be an artist. I had great admiration for what he was doing.”

Roger Brown moved from Alabama after high school and attended The School of the Art Institute of Chicago (SAIC), where his career as a serious artist intensified. By the time of his death in 1997, Roger Brown had risen to international prominence as one of the leading artists to emerge from the Chicago Imagist school of the late 1960s.

“Several of the pieces in this exhibition are informed by aspects of Alabama life and culture that Roger drew inspiration from,” said Cynthia B. Malinick, director and chief curator of the Jule Collins Smith Museum of Fine Art. “The 1990 oil on canvas portrait of Hank Williams is a fairly clear example.”

Along with a diverse sampling from Roger Brown’s oeuvre, more than 30 of Greg Brown’s charcoal and pastel drawings, linocut prints and a series of papier-mâché sculptures will be featured in the exhibition. An Auburn University alumnus, Greg Brown is a working artist and published author currently the midst of a second book on his family genealogy. Unlike the 2007 folk art exhibition at the museum that exhibited only Roger Brown’s artwork, this year’s show places him in the spotlight alongside his much-lauded sibling.

“We’re brothers that had shared influences and similarities in how we grew up,” said Greg Brown. “But at the same time, we are very different artists. At this exhibition, people will be able to compare one with the other.”

Greg Brown sees his style as more object-oriented—less abstract and political than his brother’s. Many of his works, like the charcoal and pastel hat drawings done from 1976–77 while studying for an M.F.A. at SAIC, are examinations of people’s relationships to everyday objects like clothing.

“You can tell the type of person or personality by observing the clothes they wear,” Greg Brown said. “For example, a hat can reveal the personality of its wearer without one ever having to see the person who wears it.”

Regarding the influence of Southern roots in their work, Greg Brown believes Alabama was fertile soil for nurturing the artistic growth of both Roger and himself. “There is a richness in the South that benefits an artist,” Greg Brown said. “The climate, the beauty and the relaxed, free, laid-back lifestyle—it fills you full of poetry.”

To celebrate the opening, the museum is holding an evening reception on Wednesday, May 1, that will allow attendees an exclusive preview of the exhibition and the opportunity to meet Greg Brown and discuss his work and Roger’s.

“This opening reception is an ideal place for students, faculty and the wider community to connect with a contemporary artist like Greg Brown,” said Malinick. “The museum is dedicated to creating unparalleled experiences for direct interaction with art and artists.”

The exhibition is presented in part with generous support from the Alabama State Council on the Arts and the Alabama Bicentennial Commission as part of the museum’s ongoing celebration of the Alabama bicentennial.

The May 1 opening reception runs 5–7 p.m. and includes hosted beer and wine and light fare. Tickets are free to members; non-members pay $25. To register for the reception, visit aub.ie/creativecadences. “Creative Cadences: Works of Roger and Greg Brown” runs May 2–Nov. 3 and is free and open to the public. A recommended donation of $5 is appreciated.