Filmmaker with Kickstarter and Major Festival Experience Screens at Auburn

Jule Collins Smith Museum of Fine Art presents “The Iran Job” with filmmaker Sara Nodjoumi as part of the South Arts Southern Circuit Tour of Independent Filmmakers on Tuesday, February 11 at 6:00 p.m. Following the film, Nodjoumi and the audience will engage in a discussion about the film her work. 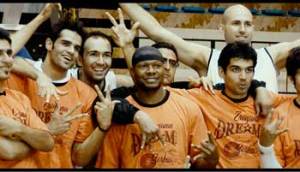 “The Iran Job” follows American basketball player Kevin Sheppard as he accepts a job to play in one of the world’s most feared countries: Iran. With tensions running high between Iran and the West, Kevin tries to separate sports from politics, only to find that politics is impossible to escape in Iran. Along the way he forms an unlikely alliance with three outspoken Iranian women. Thanks to these women, his apartment turns into an oasis of free speech, where they discuss everything from politics to religion to gender roles. Kevin’s season in Iran culminates in something much bigger than basketball: the uprising and subsequent suppression of Iran’s reformist Green Movement – a powerful prelude to the currently unfolding Arab Spring.

Advance registration is encouraged by clicking below. Also below, director Til Schauder explains how he and Nodjoumi became aware of Kevin’s story.

I first became interested in the topic of American basketball players in Iran upon reading that some of the players faced severe fines from the U.S. State Department for allegedly breaking the embargo against Iran. In the midst of the current international tension, I was inspired by these athletes, who arguably do more for dialogue between Iran and the West than any politician on either side. Reminded of the ping-pong diplomacy, which preceded Nixon’s visit to China, I decided to make a film about one American players’ experience in Iran.

I began researching players and others involved, including coaches, agents and basketball officials. Most everyone I spoke to was immediately excited about the idea to make a movie about this cross-cultural adventure. However, finding a player with that intangible special quality that’s necessary to carry a feature length film proved difficult. And since only a handful Americans play in Iran each year the choice was limited.

In the fall of 2008 – shortly after Iran’s president Mahmoud Ahmadinejad called for the destruction of Israel – Sara and I had a Skype call with Kevin Sheppard, a point-guard from the U.S. Virgin Islands. Kevin was about to start a basketball contract in the Iranian Super League. A minute into the conversation he had us rolling on the floor laughing in spite of the prospect of playing in a country that’s supposedly full of illegal nukes and Islamic terrorists. His witty charisma and disarming sense of humor convinced us to start filming immediately, even without a budget.  He had the exact qualities we were looking for in our protagonist, because they created an opportunity to add fun and positive energy to a film that could otherwise easily fall into the trap of “another-Middle Eastern-the- world-is-about-to-end” flick.

Originally the plan was for us to go as a two-person team, Sara and I. But when the journalist visas that we requested were denied and it became evident that we’d have to shoot the film “under the radar,” we decided it was safer if I went on my own, entering as a tourist with my German passport (I’m a dual German-U.S. citizen. The German citizenship made it much easer to enter Iran, for obvious reasons). Sara has U.S. and Iranian citizenship, both of which could have been problematic if we had gotten into trouble in Iran. I packed a small HDV camera, a wireless mic, and one extension cable – all of it small enough to fit into an unassuming backpack. The (in hindsight very naïve) thought was that if I ever got into trouble I could say that I’m just a German tourist filming the ancient sites of Iran.

I filmed Kevin in Iran over several visits, until on my last trip – in the run-up to Iran’s 2009 election – I was informed that I had made it onto a “black list” (for reasons still not clear to us), and was put in detention in a kind of “hotel-prison” inside the glitzy new Tehran airport. Sara was at home – five months pregnant with our second child – while I was in Tehran hand-shredding some not-so-cool-documents-when-you’re-stuck-in-Iran and flushing them down the toilet (e.g. my father-in-laws satirical art, which is banned in Iran). The detention room had a television, so I spent the night trying to find something to watch to ease my concerns. But the television had only one channel, and it played a loop of the 1982 soccer world cup final between my native Germany and Italy – one of the

most painful defeats our team ever suffered. It was like Chinese water torture. The following morning I was sent back to New York on the next plane — a stroke of luck in retrospect given the number of filmmakers and journalists recently arrested in Iran.

Iran is often portrayed as a terrorist nation, a nuclear threat, and a charter member of the Axis of Evil bent on the destruction of Israel. But behind the headlines – and the aggressive rhetoric of Iran’s hard-line leaders – lies one of the most fascinating nations, as sensuous as it can be challenging, with a life-loving people. This film focuses on Iran’s people, rather than its government, and I hope it can challenge perceptions of Iran by providing an authentic perspective that may be crucial when choices are made between war and peace. It is probably safe to say that getting Iran “right” is as impossible as getting any culture “right.” Nonetheless, for their people and for ours, it should be a high priority.

Having visited Iran a number of times I remain fascinated by contemporary Iran, specifically by its young people and their desire for social and political change. Their passion reminds me of how my East German countrymen brought down the Berlin Wall without firing a single bullet. I feel that today, little by little, young Iranians are tearing down their own wall. This process is not completed, and it’s unlikely to unfold as non- violently as in Germany. But it is under way.

More than a fish-out-of-water sports documentary this film focuses on social issues including women’s rights, political freedom and religious conflict, through the lens of a black American basketball player.

When people hear about the film, they often ask me if Kevin changed the perception of Iranians vis-à-vis the West, and specifically vis-a-vis Americans. And I think Kevin did indeed change the perception of Iranians – but not necessarily in the way most people might expect. By routinely dispelling the notion that America is a land of limitless opportunity and riches, Kevin may have actually crushed some Iranians’ illusions about America. While he often stressed that there is more opportunity in America, and more personal freedom, he also made it clear to Iranians that life in America can be – and often is – just as hard as anywhere else. He also spoke candidly to Iranians about being African– American, and how that factors into his own personal experience.

Thanks to his easy-going personality Kevin didn’t so much transform Iranians’ opinion of Americans as reinforce it. Many Americans don’t realize that Iranians actually have a very high opinion of them. Approval ratings for Americans are consistently high, sometimes in the 70% positive range. This is a stark contrast to almost anywhere else in the region, in fact anywhere else in the world. One would be hard-pressed to find those approval numbers in Europe, much less in Iran’s neighboring countries, where Americans are lucky to get into the 20% positive range. This was one of the biggest surprises for Kevin. In fact, he often marveled how – if one believed the mainstream American news media, – one could get the impression that as an American you won’t survive a single day in Iran. This was exactly opposite to his own personal experience with Iranians, who treated him with hospitality, respect and friendship.

In many ways, the most important aspect of Kevin’s experience is not how much he changed Iranians’ perception, but how thoroughly Iranians changed his perception of them. At the same time Kevin is careful not to confuse the Iranian people with the Iranian government, keenly aware of the considerable gap that exists between the two. Not unlike in the United States, for that matter.

This film is a story of people coming together to learn from each other. It celebrates our shared humanity and it points toward what unites us, rather than what separates us. Sports is the perfect platform for such a story, because sports allows people to come together in ways few, if any, other activities can. I hope the film will help remind us of what’s at stake – in terms of sheer humanity – when we muse about going to war with people we often know too little about.

—From the director’s statement of Til Schauder, The Iran Job