On Thursday, March 27, from noon to 1:00 p.m. in the Martin-Perricone Auditorium, A Little Lunch Music will present Duo Amico, made up of violinist Kay Lee and cellist Sylvia Kang. Both are originally from Korea, are conservatory-trained, and have recently relocated to Auburn. The free concert will feature music by Zoltan Kodaly, Joseph Haydn, Jules Massenet, Enrique Granados and more. The performance is being sponsored by anonymous friends of the series. 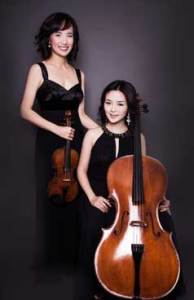 Let’s go backwards along the timeline. Kay moved to Auburn from California in 2013 after her husband took a position with the Auburn University vet school. He’s a veterinary cardiologist. Before moving here, she had been performing as, among other things, concertmaster for the Auburn Symphony Orchestra in Auburn, California. I know, right?!

So Sylvia moved to our area from New York in 2012, when her husband took an accounting job in Alex City. She knew Kay, and noticed on Facebook that Kay was concertmaster with an orchestra in a town named Auburn. So Sylvia contacted her, only to find out that Kay had no connection with Auburn, Alabama, or at least not yet. Only months later, Kay’s husband was offered that job at the vet school.

Ok, I said that Sylvia knew Kay, but that’s not the whole story. They both have been competition prizewinners and international performers, but not together. They both have studied in prestigious music schools in the United States, but not at the same ones.

But in Korea, when they were children, both Kay and Sylvia were class of 1998 graduates from the Seoul Arts High School, and before that attended Yewon Middle School, one of the country’s top arts magnet schools.

Now, the currents of fate have brought them here, and Thursday at the museum will be the premiere performance of Duo Amico. Amico is Italian for “friend.”

From Classmates and Friends to Collaborators and Leaders

Kay and Sylvia have arrived here from communities, American communities, where public-schools have well-established string programs. Here, where football is king and marching band the court minstrel, we have none in the public schools.

In addition to being friends, the duo may find themselves in a leadership role, bringing our children new, though ironically centuries-old, ways to express themselves artistically. They even mentioned ideas for a music festival. Yay!

Both Kay and Sylvia come from families of classical musicians. In 2007, Eleonore Schoenfeld, Sylvia’s cello teacher at the University of Southern California, passed away. Eleonore famously performed with her sister, violinist Alice Schoenfeld, and had sent her a CD of duos by the two.