By Communications and MarketingMay 8, 2014Music

On May 8, baritone Matthew Hoch will join Bill Schaffer on horn and Joshua Pifer on piano for a free concert from noon to 1:00 PM. The concert is being co-sponsored by George Kent and anonymous friends of the series. They will perform the poetry of Heinrich Heine set to music by composer Robert Schumann and the poetry of Walt Whitman set to music by composer Simon Sargon. 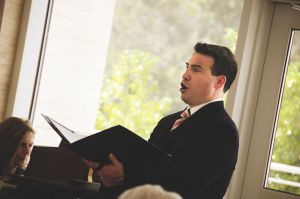 The opportunity to sing poetry was not why Matthew Hoch got into music to begin with. “I was actually a saxophonist first,” he said, having come to music mainly for “its own sake.” But in college, as his focus changed to voice, poetry became integral to his craft.

He said that in classical vocal repertoire, the poetry is almost always more important than the music, or at least it came first. He estimates 90% of the music has been inspired by the poetry of someone other than the composer. “You’re forced to learn a lot about language and diction,” said Hoch.

The centerpiece of Thursday’s program is another musical setting of poetry, this time that of Walt Whitman. The piece is A Clear Midnight by still-living composer Simon Sargon.

Thursday’s musicians recently met the composer who coached them on the piece. In January, they performed it with Sargon present at Southern Methodist University in Dallas. Its instrumentation is voice, piano and French horn, played by Auburn’s horn professor William Schaffer. Hoch said he found the piece while looking for music that used baritone voice with wind instruments.

He said one of the joys of working at Auburn has been the strength of its winds program and the chances for collaboration through chamber music. “That’s been a new hobby of mine since coming to Auburn,” said Hoch. Up to now, most of his work has been with traditional vocal repertoire.

Auburn piano lecturer Josh Pifer will play piano for both the Schumann and the Sargon pieces. Pifer performed a solo recital at the museum in February. In September, he will return to perform with flutist Elizabeth Goode.

A musician himself, Patrick McCurry coordinates A Little Lunch Music and occasionally performs for it. He can also be heard performing with Cullars Improvisational Rotation on Thursday nights at the museum from 6 to 8 pm. He blogs about the arts in our community.