Photography takes on many roles in “Blow-Up” 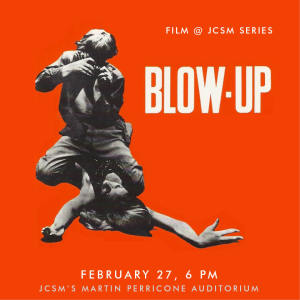 Michelangelo Antonioni’s 1966 film Blow-Up is, in a sense, as much a detective story as it is a thriller or drama. Its central character is a mod London photographer, Thomas, who appears to be growing bored with the vacuous subjects he photographs. While the movie starts out as something of an exposé on the world of fashion photography in the mid-1960s, it quickly becomes something of a mystery when Thomas’s photography suddenly manifests sinister goings-on in a London park that lead Thomas to take on the role of an investigator of sorts.

Thomas’s character is dubious, to say the least, as he frequently takes photos of subjects without their knowledge or consent. It is this presumptuousness, however, that unearths the mystery at the heart of the film. While photographing two lovers in a London park, he is spotted by one of the subjects, Jane (or so she calls herself when addressing Thomas). Though she angrily demands the film, Thomas refuses and continues to snap photos of her as she flees the park. What he finds when he develops the film explains her behavior. Upon increasing the size of the prints and closely examining his work, Thomas sees what appears to be a gunman lurking in the bushes, and, in another print, a body in the grass.

Throughout the film, photography takes on various roles and relevancies. It manifests first as an avenue for entertainment, titillation, and objectification for Thomas (and viewers of his work), as he makes his living photographing young models. It then becomes a means of invasion, with which Thomas begins to pry into the life and potential secrets of Jane and her lover. And it ultimately becomes a tool for investigation, when the products of his invasion present him with possible evidence of foul play. It is worth noting that the crime Thomas may have captured provides, in a sense, as much (if not more) excitement for him as did photographing women in his studio.

Blow-Up is inspired by a short story by Julio Cortazar, called “The Spit of the Devil.” Director Antonioni wrote the screenplay alongside Tonino Guerra, and it was Antonioni’s first film in English. The film also had significant impact on production codes, and is credited in large part for leveling a final (and inevitable) blow against them and paving the way for film to the ratings system we have today. The film contains within it fascinating and innovative visuals and cinematography, appropriate for a story that relies so heavily on photography, and the mystery and investigation that it examines is intriguing. A major step forward for film in many respects, Blow-Up is a great watch for students and enthusiasts of film.

Jule Collins Smith Museum of Fine Art screens Blow-Up on Thursday, February 27 at 6 pm as a part of the series. Keri Watson, assistant professor of Art History, Ithaca College, will introduce the film and guide discussion. Live music begins at 5 pm with tapas menu and specialty beverage service ranging from seven to 10 dollars. Admission to the movie is free courtesy of JCSM Business Partners.