Jule Collins Smith Museum of Fine Art will screen Rear Window on Thursday, February 13 at 6 pm. The screening is in conjunction with the FILM@JCSM series, which promotes interdisciplinary learning. Professor Sara Blair, University of Michigan, will introduce the film and guide discussion. The Museum Cafe is open before and after the film for tapas and specialty beverage service. 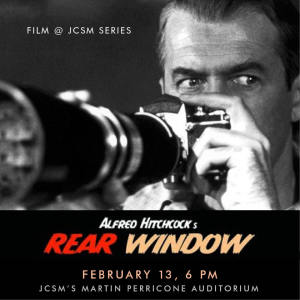 Rear Window, generally ranked among the very best of director Alfred Hitchcock’s body of work, was released in 1954. Inspired by the 1942 short story “It Had to Be Murder” by mystery writer Cornell Woolrich, the movie tells the story of professional photographer L.B. Jefferies (played by James Stewart), called “Jeff” by the characters of the film, who is stuck in his apartment in the sticky heat of a New York summer due to a broken leg he received while on a shoot. Jeff has no entertainment other than that of watching his neighbors’ daily activities through the rear window of his apartment. On a brilliantly constructed set, an entire neighborhood is made visible outside of Jeff’s window, in which he can see, among other things, a ballet dancer whom he deems “Miss Torso,” who lacks any semblance of shyness, a newlywed couple who keep their shades drawn for a good portion of the film, a depressed single woman, called “Miss Lonelyhearts,” who struggles to find a suitable companion, and a musician, in whose apartment Hitchcock makes one of his famous cameos. The most important view Jeff has, however, is the window of his neighbor Lars Thorwald, whose sickly and difficult wife goes “missing” under highly suspicious circumstances. After hearing a scream and crash in the middle of the night, Jeff, noticing Mrs. Thorwald’s disappearance, sees Lars carrying suitcase after suitcase out of his apartment in the early hours of a rainy morning, and is thoroughly convinced of foul play. Convincing his caretaker, Stella, and his beautiful girlfriend, Lisa (played by Grace Kelly), that something is definitely amiss, they begin to spy on Thorwald, determined to find proof that he did away with his wife.

The role of photography in the film is an important one. Jeff uses his photographic lens to spy on his neighbors. It is through his profession and his photography equipment that he begins to piece together the crime that has taken place mere feet from his home, and he even comes to depend on his photographic equipment for his own safety. Jeff’s girlfriend, Lisa – a romantic element that is not in the original story, and brought in by screenwriter John Michael Hayes and Hitchcock – is a key player in the investigation of Thorwald, and photography guides her actions and character, as well. Jeff watches through his lens as Lisa investigates Thorwald’s apartment, and Lisa’s interest in Jeff’s photography career as it relates to their relationship fuels the interactions between their two characters. Photography in Rear Window serves as a catalyst to the plot, a means by which the characters relate to one another, and the way the murder investigation comes to a head.

Shot in just one month and all on one set, Rear Window has been ranked as one of the finest mystery films of cinematic history. With its mixture of suspense, mystery, and macabre humor, it is a quintessentially Hitchcockian film. Stewart himself said it was his favorite of his four collaborations with the director. The film only became available to the public again as recently as the 1980s, along with four other classic Hitchcock films, having been kept out of circulation by trouble with the Hitchcock estate. With a wonderful cast of colorful characters, a fabulous set (from which the film never departs), and an intriguing plot underscored by photography throughout the film, Rear Window, is an iconic piece in the Alfred Hitchcock collection, and a must-see for any movie lover.