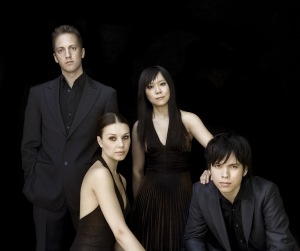 Two public performances are scheduled for the internationally acclaimed Attacca Quartet. The Auburn Chamber Music Society will host the group for the society’s 50th anniversary season, and Jule Collins Smith Museum of Fine Art will feature them to complement the traveling exhibition, “Rembrandt, Rubens, Gainsborough, and the Golden Age of Painting in Europe.”

With a first place win at the Seventh Osaka International Chamber Music Competition in 2011 among their many awards, the Attacca Quartet has become one of America’s premier young performing ensembles. As reviewed by “The New York Times,” “…the concert was, in a word, sensational. The Attacca players handled their roles with precision and passion, to deeply moving effect.” 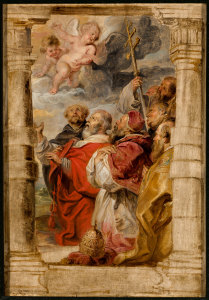 On Tuesday, Oct. 28, from noon to 1 p.m., the musicians will perform at Jule Collins Smith Museum of Fine Art. The program will include selections by Franz Joseph Haydn and others, along with a discussion of the themes the visual and musical art share with the “Golden Age” exhibition. Organized by the Speed Art Museum in Louisville, Kentucky, the special presentation features 70 works of art created during the 17th through early 19th centuries and illustrates a period of great political, economic, scientific and religious transformations.

Pictured to the right is The Princes of the Church Adoring the Eucharist, about 1626-1627, by Peter Paul Rubens.  Collection of the Speed Art Museum, Gift in memory of George W. Norton IV, by his mother, Mrs. George W. Norton, Jr. and his aunt, Mrs. Leonard T. Davidson.

On Wednesday, Oct. 29 at 7:30 p.m., the ensemble will perform at the Goodwin Music Building Recital Hall for the Auburn Chamber Music Society’s concert series. The program will include Haydn’s “String Quartet #31 in B minor, Op. 33, #1;” John Adam’s “Selections from John’s Book of Alleged Dances,” and Ludwig van Beethoven’s “String Quartet #12 in E flat Major, Op. 127.”

The Attacca Quartet is now in its 11th season, beginning at Juilliard School in 2003.  It is comprised of violinists Amy Schroeder and Keiko Tokunaga, violist Luke Fleming and cellist Andrew Yee. They made their professional debut in 2007 as a part of the Artists International Winners Series in Carnegie Hall’s Weill Recital Hall and have appeared there on numerous occasions. They are honored with the 2013 National Federation of Music Clubs Centennial Chamber Music Award, the Arthur Foote Award from the Harvard Musical Association, and the Lotos Prize in the Arts. The quartet served as the Julliard Graduate Resident String Quartet from 2011-13 and was recently named the Quartet in Residence for the Metropolitan Museum of Art.

The lunchtime performance at the art museum is free and open to the public with support from the Auburn University Special Lecture Fund. However, the museum is recommending a $5 donation for admission to the exhibition, “Rembrandt, Rubens, Gainsborough, and the Golden Age of Painting in Europe.” For more information about the museum, go to jcsm.auburn.edu or call 334-844-1484. The evening performance at Goodwin Music Building Recital Hall is $10 for general admission and $5 for students and children. For more information on that performance, call 334-844-4165 or email music@auburn.edu.