Spotlight: Edvard Munch, The Dead Mother and Her Child, 1901

By Communications and MarketingJune 8, 2015News, Spotlight 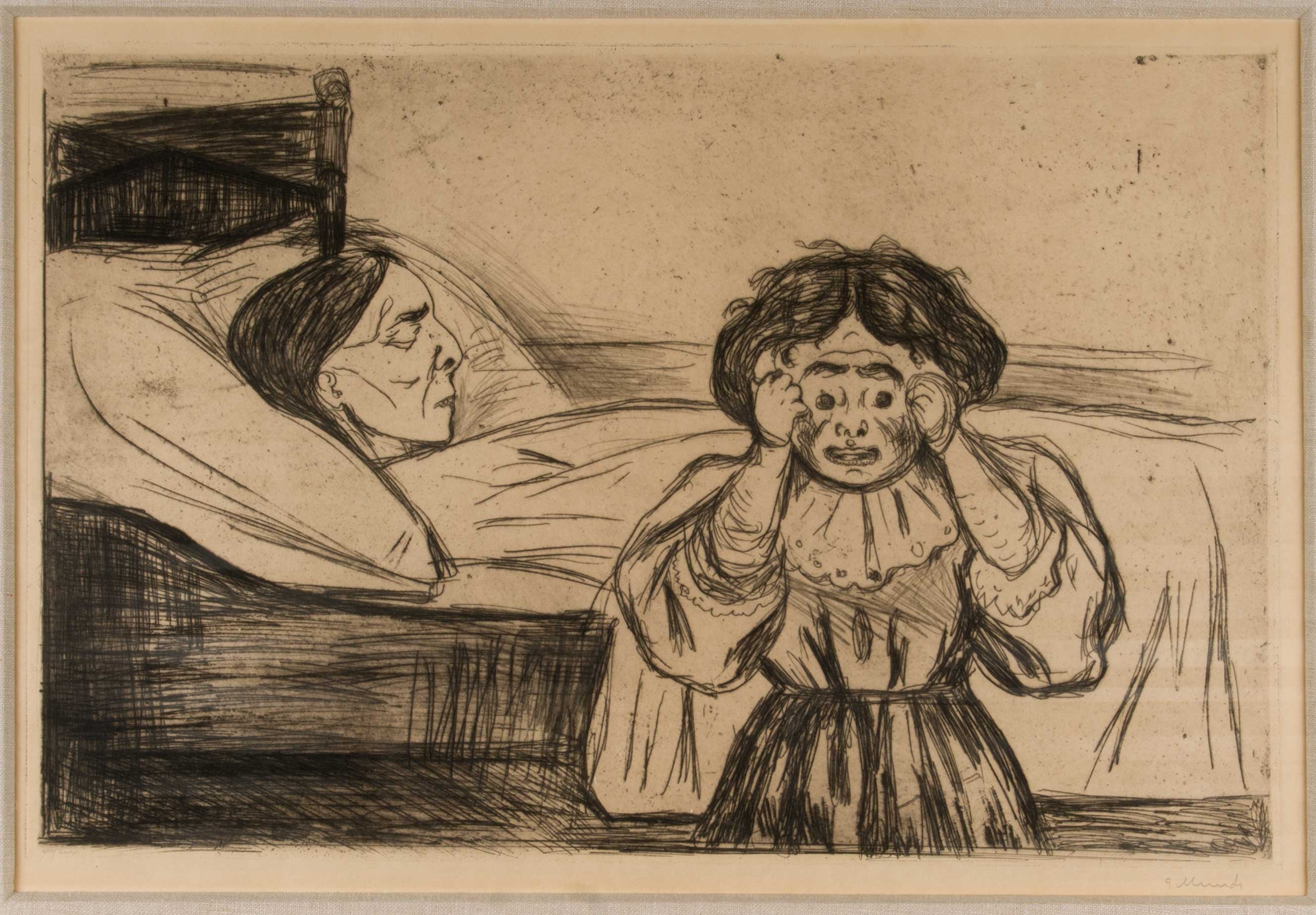 Edvard Munch, who lived from 1863–1944, is renowned for his haunting imagery that speaks to universal emotions   and experiences. Love, jealousy, separation, and death are among the motifs he returned to frequently, always seeking new ways to articulate those intimate aspectsof the human condition. Though equally adept at painting and printmaking, he was especially prolific in the latter, producing well over 800 different images in etching, lithography, woodcut, and other techniques. Essentially self-taught in print media, he was a lifelong innovator and his prints reflect a constant search to expand the capabilities inherent in each process. Through his graphic work, Munch achieved his most heartfelt and affecting statements.

Munch’s best-known creation, The Scream, is truly one of the most widely recognized images in modern art. Occurring in several versions, it depicts an agonized figure clutching his (or her) head while a swirling and agitated landscape bears down upon him from all sides. This iconic work has been appropriated mercilessly into posters, cartoons, advertisements, and other displays of contemporary popular culture. Yet the original somehow maintains its powerful effect on its viewers. With broad and direct strokes Munch vividly captures an emotion, or emotional state, in a way that resonates deeply with audiences of diverse cultures, age, and experience.

The Scream’s wide popularity helped shape a romantic perception of its creator as a profoundly disturbed soul. And indeed Munch’s life was filled with tragedy and heartache. At age five, he suffered the loss of his mother; his eldest sister died when Munch was 13. Both women succumbed to tuberculosis, as did his grandmother and an aunt. Edvard, too, was sickly as a child. Later in life he was afflicted by alcoholism and spent short periods in clinics for a nervous disorder. Though never to marry, he had several love affairs, of which a few ended badly. Perhaps, then, it is no surprise that infirmity, death, and melancholy figure so strongly in his art.

Our new addition to the collection and now one of our strongest Expressionist works, The Dead Mother and Her Child addresses the profound sadness that Munch experienced. A grief-stricken young child, a stand-in for Munch himself, stares directly at each of us. The gesture is of course similar to the one we know from The Scream. Her clinched hands are held tight against a masklike and uncomprehending face. Munch expressed in his art exactly what he had lived, unashamed to bare his weaknesses and afflictions—alongside passions and joys that he also experienced. His art reveals an intensity of feeling and lack of cynicism that is a great antidote to the increasing sense of apathy or non-engagement that contemporary culture can impose on us. Authentic experiences are what we try to foster at the museum through our programs and presentation of significant works of art. Naturally, we are excited to have this remarkable etching by one of the world’s greatest artists come into our collection.