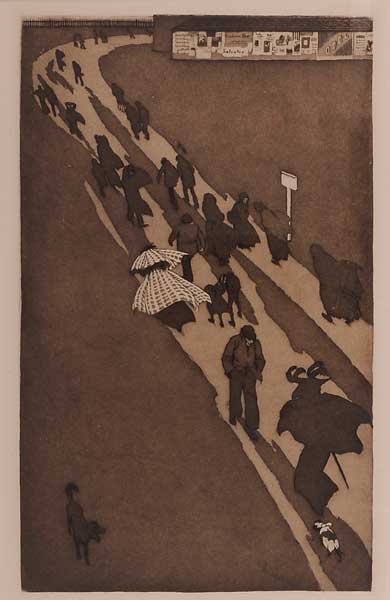 Eugen Kirchner’s dramatic print, November, was created for the turn-ofthe- century magazine of arts and literature Pan, published in Berlin from 1895 through 1900. Together with Jugend, a similar journal produced in Munich (1896–1914), Pan played an important role in the development of Art Nouveau in Germany, known there as Jugendstil, or “youth style.” Pan printed stories, poems, and critical essays by vanguard authors of the day and featured original etchings, woodcuts, and lithographs by both well-known and emerging artists. Its international roster of visual artists included Aubrey Beardsley, Käthe Kollwitz, Maximilien Luce, Joseph Pennell, Auguste Rodin, Georges Seurat, Paul Signac, Henri de Toulouse-Lautrec, and Félix Vallotton.

Reacting to the staid academic styles of the 19th century, Jugendstil and its kindred movements across Europe (Arte Joven in Spain, Arte Nuova in Italy, Nieuwe Kunst in the Netherlands, and Art Nouveau in France and Britain) advocated a total design aesthetic to be manifested in art, architecture, and the applied arts. Though each nation’s variant on Art Nouveau reflected an indigenous experience, all were characterized by the use of highly stylized curvilinear forms and floral or other organic motifs. An account published in Pan described the “sudden violent curves generated by the crack of a whip.” 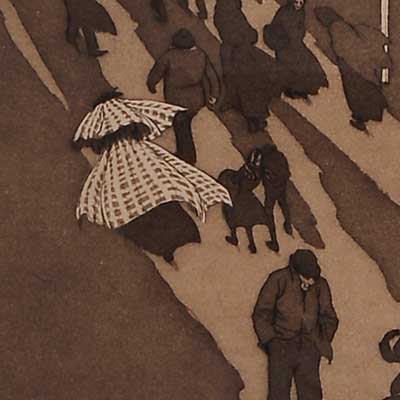 That expression of dynamism is certainly in strong evidence in the present etching, November, a distinctive Jugendstil work. Kirchner, a founding member of the Munich Secession art movement, gives vivid graphic representation to the breezy, cold conditions of a late autumn day in Germany. The composition’s long diagonal promenade of striding characters, each confronting the bitter wind in varying degrees of resolve, recedes sharply into the distance and arcs quickly around the corner of a building. In broad contrast to the otherwise undistinguished planes in the image, every individual is personalized through animated gesture and detail, including the dogs, and the low building facade is festooned with the marks of modern life and commerce. [Odol, the only legible poster depicted in the print, is the trade name of a line of toothpaste and mouthwash.] A remarkable balance of design, craft, and narrative effect, Kirchner’s November provides a striking example of the transitional period in pre-World War I art when 19th-century modes began to make way for Expressionism’s angst and the more cerebral inventions of pure abstraction.