Georgia O’Keeffe first visited New Mexico in 1929. Upon her return from that trip, she wrote a letter to her friend Rebecca Strand, noting that she had visited Alcalde, a small town forty miles south of Taos, for three or four days.1 While in Alcalde, she stayed at the H & M Ranch, owned by Marie Tudor Garland, a painter, poet, and author. When O’Keeffe visited New Mexico again, in the summer of 1931, she returned to Alcalde, renting a small cottage from Garland.2 Both of these early visits were productive for her and resulted in many drawings and paintings. A number of those preparatory works directly relate to this painting, which was exhibited by her husband Alfred Stieglitz at his gallery An American Place in 1931. 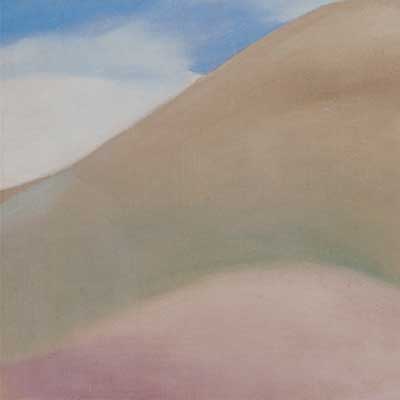 O’Keeffe all but fills the panoramic sweep of this small canvas with an undulating natural form that evokes the high desert landscape. Only the slightest contrast of blue sky and white clouds appears at the very top. As she often did in her New Mexico landscapes, she focuses on the land itself. At first, the overall sand tones are disappointing, considering what a brilliant colorist O’Keeffe could be, but the subtle pink to mauve and contrasting greens that she used to define this barren outcropping become evident upon further observation. There is a miragelike quality to this painting of rolling hills that varies from a flat and two-dimensional image to a massive formation of sand, stone, and shadow. Contemplating it, one realizes it affords the viewer an accurate experience of the New Mexico landscape, which can change instantly as light and shadow transform the scene. Like Cos Cob (cat. no. 79), O’Keeffe’s other painting acquired for Advancing American Art, this work was completed some time before the historic exhibition. Although we know Stieglitz served as an advisor for Advancing American Art and most likely recommended these paintings, along with others from his gallery at the time, it is important to recognize that much of the work included in the project was done by wellrespected and -established modern artists, such as O’Keeffe. In other words, it did not solely comprise examples by the leftist radicals certain members of Congress depicted in their criticisms.