The Tipton Trio Will Bring Jazz to A Little Lunch Music

On Thursday, April 10, from noon to 1:00 PM, The Tipton Trio will perform in the museum’s auditorium. This jazz group from Columbus is made up of Donald Tipton on piano, Eric Buchanan on drums and Tim Ferguson on saxophone. The performance is being co-sponsored in part by Connie and Robert DuPriest and Yvonne Kozlowski. 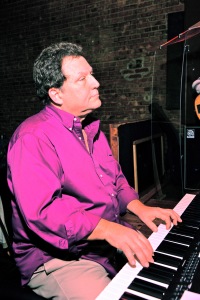 For twenty years, Donald Tipton made his living as an underwater photographer, and has even published a coffee-table book calledUpon the Face of the Waters. Though still earning a living as a photographer and videographer, recently he has started to pursue playing jazz piano professionally.

“Jazz had always been my kind of back-pocket passion,” said Tipton, who graduated from Columbus College–before it became Columbus State University–with a music degree. In 2007, he renewed his passion to play, studying with then head of CSU’s jazz program Shirantha Beddage (pronounced something like “BED-uh-gay”) and his eventual successor, Alexander Pershounin.

Tipton said that as his playing developed, the jazz community in Columbus, Georgia, embraced him. He got involved in its Columbus Jazz Society, and in 2011 began collaborating with Buddy Nelms, owner of local restaurant and music venue The Loft, to bring weekly jazz into the community.

Playing with Tipton on Thursday will be saxophonist and composer Tim Ferguson. Ferguson is originally from Atlanta and will begin studying at CSU in the fall. “He is a very, very gifted musician,” said Tipton.

Eric Buchanan will play drums. Buchanan grew up in New York City where he became familiar with the jazz masters who played in the clubs every night. He has performed around the world as a professional drummer, and recently has returned to Columbus to be with his family. “He is really one of the most creative percussionists I’ve ever worked with,” said Tipton.

A musician himself, Patrick McCurry coordinates A Little Lunch Music and occasionally performs for it and the museum’s Thursday evening jazz group Cullars Improvisational Rotation. He blogs about the arts in our community.