By Communications and MarketingApril 16, 2014Music

On Thursday, April 17, from noon to 1:00 p.m. the Auburn Indian Music Ensemble will return to A Little Lunch Music, performing in the auditorium. The group is an Auburn University class made up of students and community musicians and led by Dr. Raj Chaudhury. The free concert is being sponsored by Nick and Carolyn Davis. 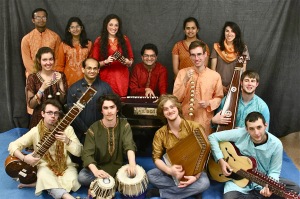 Enrollment in the Auburn Indian Music Ensemble class at Auburn University represents a “duke’s mixture” of backgrounds. Some know music, some don’t. Some are from India, some aren’t. I asked its teacher and lead performer Raj Chaudhury about what draws people to his class. He said about two out of three have had some kind of exposure to Indian music. The others have had friends in the class or want to try something new in college.

No matter what their background, all members of the group get the opportunity to compose music for performances. For some, that means writing a short passage based on the melodic and rhythmic structure–the raag–of a particular piece of music. For others, it means coming up with a completely new piece of music.

Chaudhury cut his teeth on the music of Rabindranath Tagore, a composer and performer of what he calls semi-classical Indian music. “It’s more like Gershwin than Beethoven,” he told me, admitting it’s not a perfect analogy.

Classical Indian music has strict performance rules and is based primarily on melody and rhythm. The music of Tagore (1861-1941), much like that of his contemporary, George Gershwin (1898-1937), uses non-classical influences like Western and folk music. Also, being a poet, a Nobel laureate actually, Tagore based much of his compositions on his lyrics, which is not as common in the Indian classical tradition.

As the class evolves, it is accumulating instruments and influences from other cultures. Some of the returning students are developing music for a group called Carnatic Fusion. They did a piece the last time the Ensemble was at the museum. To my ear it was kind of a westernized jazz-rock interpretation of a traditional raag, and was very good.

Raj said that students from the group have been inspired to form an official school club called the Auburn Cultural Music Society. It works to encourage performances and awareness of music from all over the world. Members from the club recently performed at an Iranian New Year’s Festival.

As diverse as the sounds of the group are becoming, Chaudhury remains committed to teaching and performing the centuries-old traditions of pure Indian classical music. If you’ve heard the music, I hope you’ll come again and begin to hear the genre’s deeper subtleties. If you haven’t heard them, come with open ears and be introduced to something completely different.

A musician himself, Patrick McCurry coordinates A Little Lunch Music and occasionally performs for the series and at the museum on Thursdays with Cullars Improvisational Rotation. He blogs about the arts in our community.