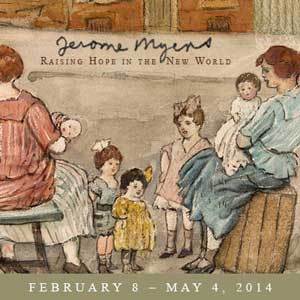 Jule Collins Smith Museum of Fine Art, Auburn University will present a select group of paintings and works on paper in Jerome Myers: Raising Hope in the New World from February 8 through May 4, 2014. Myers’ career spans the late 19th and first half of the 20th kentury, and he is considered a peer of urban realists such as Robert Henri, John Sloan, and George Luks. An illustrated publication with essays accompanies the exhibition.

Marilyn Laufer, museum director and curator of the exhibition, said that support from donors and museum colleagues prompted research and a re-evaluation of Myers at Auburn’s art museum, which includes work by the artist from JCSM’s permanent collection. “Some art historians view Myers’ work as overly romantic, but he painted the reality he saw on New York’s Lower East Side.”

Laufer said that Myers’ subjects were children and families dressed in their best clothing at the markets, on stoops, or at religious and cultural festivals. “During this same historical period, you find other genre paintings of people living in poverty and relying on street smarts to get by,” she said. “So much of the political and social climate of the progressive era was geared towards revealing the sad impoverished conditions of the tenements and the immigrants who lived there. But Myers painted that culture, focusing on the positive and hopefulness of that immigrant community which he believed was part of the melting pot he saw as modern America. A lot of the progressive rhetoric was how to ‘Americanize’ these new citizens, but Myers celebrated that difference.”

Laufer noted that the exhibition was timely given views and discussion of immigration today. “Myers’ empathy for his immigrant subjects went against what was the prevalent thought at the time,” she said. “He tried to capture people who hoped for fulfillment of the American Dream for their children.”

Charitable, tax-deductible gifts in support of the Jule Collins Smith Museum of Fine Art or other programs at Auburn are made through the Auburn University Foundation, which receives such gifts on the university’s behalf. Donors, alumni, and friends can make a philanthropic gift in support of the museum and future exhibitions.