Returning for the third year in a row, violinist Robin Scott and cellist Ahrim Kim will perform from noon to 1:00 PM this Thursday, January 23, for “A Little Lunch Music.” The free concert will be in the Grand Gallery. Thanks to our sponsor, Tee Kern. 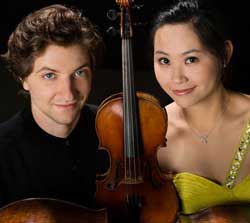 Last time they were here, it was Valentine’s Day 2013. For me, one of the highlights of the whole year, aside from having 100-plus audience members sing me Happy Birthday that day, was this husband and wife’s performance of the Handel-Halvorsen duo. It is a flashy piece that requires technical skill, and I have been told that it can often be performed mechanically. But that Valentine’s Day, they played it differently. It was fiery, romantic, and beautiful.

“I’m always happy when I get to play with her,” said Robin. 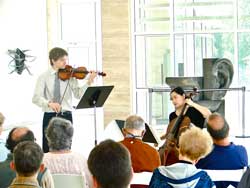 This could be the last time we’ll see the couple at the series. Last year, they held both the cello and the violin fellowships of the Montgomery Symphony Orchestra. Robin’s term ended in 2013, and Ahrim’s will finish out with her final recital on May 6. Plans are to move away come summer.

And they are already on the road a lot. Robin performs with the New York Classical Players. That group will soon tour with Grammy-winning Korean soprano Sumi Jo. Ahrim is touring with the Orpheus Chamber Orchestra, and recently won a spot at the Marlboro Music Festival.

A musician himself, Patrick McCurry coordinates “A Little Lunch Music” and occasionally performs for it. He blogs about the arts in our community.