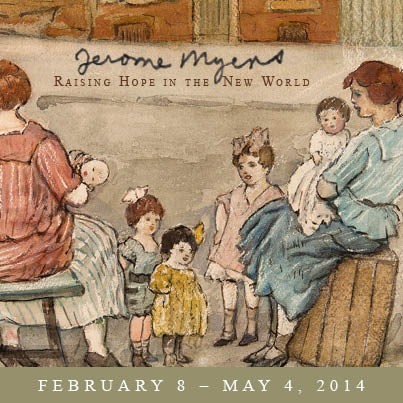 Jerome Myers: Raising Hope in the New World closes Sunday, May 4, 2014 at 4:00 pm at Jule Collins Smith Museum of Fine Art, Auburn University. For the spring semester, art history students from Auburn presented A Little Art Talk and prepared blog posts based on their presentations. Below is a guest blog on a painting from the Myers’ exhibition.

A Little Art Talk continues through the summer 2014 on Wednesdays at Noon with museum staff and docents.

Admission to the exhibition is free courtesy of JCSM Business Partners. A catalogue is available for purchase in the Museum Shop.

Jerome Myers was born in Petersburg, Virginia in 1867, but spent nearly his entire life in large cities in the northeast such as Philadelphia and Baltimore, before finally settling on New York City. Myers drew his inspiration for his paintings, drawings, writings, and other works from the urban landscape with which he was so familiar and  about which he was deeply affectionate—leading him to become one of the driving forces of the Ashcan School. The Ashcan School revolved around urban life and scenes; specifically those scenes which were set in areas of New York City. Street Carousel exemplifies these traits.

The early twentieth century movement of the Ashcan School can be read as a reflection of the mid-nineteenth century Hudson River School movement in which vast expanses of raw, untouched land were painted in idealized and romanticized ways; the Ashcan School painters interpreted American beauty in their own ways. Whereas the standard for a beautiful representation of American land had so recently been the mystique of the untamed areas, Ashcan painters helped redefine and represent what was at the heart of American culture fifty years later: an urban identity driven by industrialization. Many Ashcan paintings illustrate different aspects of urban American life in this time; we see dirty workers, we see excited children, we see loose animals, and we see the ever crowded and constantly moving streets of the city.

Street Carousel, painted in 1906, illustrates an extremely energetic street scene that is, in some respects, timeless. Myers’s scene feels like something that one could experience today, one hundred and eight years later, when walking around neighborhoods in New York City. Even if the viewer is not intimately familiar with the neighborhoods present in these paintings, Myers’s environments create a sense of familiarity as if one had lived in New York his or her entire life. Nevertheless, the presence of this painting is subtle at first, but almost seems to become overwhelming once you spend time viewing it.

Myers creates a sense of energy with his style of painting. His use of loose brushstrokes lends to the action that each character is performing; the children on the carousel nearly blend into one another as they rapidly spin, the people hanging outside of their windows seem to be simultaneously emerging from and retracting into their rooms, and the two older women in the bottom left laugh and shrug as they gossip and chatter. Even the buildings themselves seem to be moving within the scene in a way; they are not by any means tall buildings, but Myers stretches them up into the sky in a strange and almost paradoxical way which allows them to stand high above the action while still seeming compressed upon themselves.

Dissecting the color palette of the painting, however, seems to tell a different story. Although there are some noticeable and seemingly vibrant hues in the piece, the colors Myers employs are overall muted and almost neutral in nature throughout the painting, and in fact the colors which seem the brightest, when placed alone out of context, are mostly dull. With this in mind, it seems even more impressive that Myers is able to fill the canvas with such life and energy using such a limited gamut of colors. It is remarkable even more still when you realize that even though you are unable to make out defining features of the different people present in Street Carousel, it is inarguable that every figure within the piece—human or not—has a robust personality all its own. Even the sky—which is simply composed of a drab grayish expanse behind the rooftops—seems to be actively participating in the scene rather than just falling behind the buildings, by carefully creeping along the jutting edges of the tops of the buildings and peering in over all of the street-goers, full of curiosity. The buildings themselves seem to have competing personalities as well. Of the two front most buildings, the left building seems to be shying away from the action by falling into a slightly darker shade and having each of its windows mostly obscured by curtains while its bottom half hides behind the fabric tents of street vendors. In contrast, the building on the right seems to be desperate to join us in the street, jutting just slightly more forward than its counterpart, having each of its windows surrounded by shutters flung open, only allowing itself to be obscured by the actual carousel, and having an additional set of windows at its top which seem to act as eyes, peering down longingly into the excited street below.

Myers has done such an excellent job composing a convincing scene for us that it’s easy to get lost in the scene ourselves. The painting is in no way a photorealistic representation of this street, but simply viewing this connected space of livelihood is enough for viewers to be present in the street. It seems easy to look at this and hear the murmur of jumbled conversation, the children on the carousel screaming and laughing as they whirl around, or the street vendors discussing transactions with the passersby who approach them. One could hear the tenants upstairs shouting down into the streets at people they know, or at their children to come inside or behave; even the dog begins to bark and contribute to the conversation. Street Carousel seems to welcome the viewers to working their ways through this street, and to weave in and out of a dancing crowd of people—a crowd which Myers intends to stand as an open invitation. Though the figures in the painting are anonymous and it is difficult to place any distinguishing features about any of them, Myers has created a world with this painting in the viewer exists with the subjects as a friend, or possibly even as a neighbor. Due to the incredibly convivial atmosphere, Jerome Myers’ Street Carousel is overwhelmingly powerful. It is clear through his work in this piece just how deeply passionate Myers was about the city. As he said in 1940, “My love was my witness in recording these earnest, simple lives, these visions of the slums clothed in dignity, never to me mere slums but the habitations of a people who were rich in spirit and effort.”