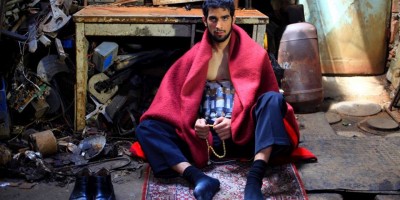 JCSM is a co-sponsor with the Department of Foreign Languages and the Office of International Programs- Auburn Abroad for these screenings. These films are all available with English subtitles. The Spanish Language Film Series was made possible with the support of Pragda, the Secretary of State for Culture of Spain, and its Program for Cultural Cooperation with United States’ Universities. Auditorium seating is limited and available on a first-come, first-served basis. Admission is free.

For extended film descriptions and to watch the trailers, click here.

Based on the actual events of a 1994 bombing in Buenos Aires, God’s Slave follows Ahmed, trained since childhood as an Islamic terrorist now assigned to execute a suicide bomb at a synagogue; and David, the cold-blooded Israeli special agent who will stop at nothing to prevent the attack.

Based on a real story, 339 Amín Abel Hasbún. Memory of a Crime is an intriguing account of the murder of Amín Abel Hasbún, a brilliant student leader in the Dominican Republic accused of kidnapping U.S. Embassy official J. Crowley. Hasbún was one of many young leftists fighting against the government of Dr. Joaquín Balaguer, who favored a repressive regime.

Uruguay’s official selection for Best Foreign Academy Award, Mr. Kaplan follows Jacob Kaplan’s ordinary life in Uruguay. Like many of his other Jewish friends, Jacob fled Europe for South America because of World War II. But now, turning 76, he’s become rather grumpy, fed up with his community and his family’s lack of interest in their own heritage. One beach bar may, however, provide him with an unexpected opportunity to achieve greatness and recover his family’s respect in the community: its owner, a quiet, elderly German, raises Mr. Kaplan’s suspicion of being a runaway Nazi.

Asier and I tells the story of the friendship between Aitor and Asier Aranguren from their time growing up together in the conflict-affected and politicized eighties of Pamplona. Eventually, Aitor moved to Madrid to pursue his dream of becoming an actor and Asier joined the terrorist group ETA. Years later, Asier was arrested and interned in a French prison, where he was detained for eight years. When Asier was released in 2010, Aitor wanted to recover his relationship with his childhood friend and try to understand what could have led to him to join ETA, so he went to his release in France with a camera in order to tell this story.

Rising Venezuelan actor Edgar Ramírez stars in this biopic of one of Latin America’s greatest figures. Simón Bolívar fought over 100 battles against the Spanish Empire in South America. He rode over 70,000 miles on horseback. His military campaigns covered twice the territory of those of Alexander the Great. But his army never conquered – it liberated. The most expensive Latin American film ever produced, The Liberator is a riveting portrayal of the man who led Venezuela, Colombia, Panama, Peru, and Ecuador toward independence.