As a part of expanded evening programming, Jule Collins Smith Museum of Fine Art, Auburn University will host the Third Thursday Poetry Series. The next reading is Thursday, March 20, 2014 at 7:00 pm. The evening will begin with tapas, beer, wine, and cocktail menus in the Museum Café at 5:00 pm and a jazz performance by Patrick McCurry and Dan Mackowski at 6:00 pm. The March featured poets are Gabby Bates and Madison P. Jones IV. Galleries remain open until 8:00 pm on Thursdays, and admission is free courtesy of JCSM Business Partners. 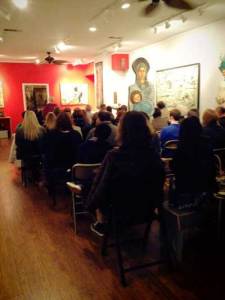 Ken Autrey, who coordinates the series with Keetje Kuipers, said that the series is the only monthly poetry offering in the Auburn-Opelika area. “The Third Thursday Poetry series was started in early 2013 by Jason Crane, with readings held at the Gnu’s Room in Auburn,” said Autrey. “When Jason moved, and the Gnu’s Room moved to Opelika, Keetje and I revived the series at Bell + Bragg Gallery.” Autrey said that when that venue closed, he was able to partner with the museum to provide an outlet for the poetry written and published in the region.

“Strong attendance at the readings demonstrates that there is a loyal local audience for poetry,” he said. “Our cooperative arrangement with the Jule Collins Smith Museum of Fine Art affirms the general vitality and importance of the arts in our community—visual, musical, and literary. The mix of programming at the museum suggests that the various arts cannot only coexist but can enrich one another,” he said. “We begin our program with a 15 to 20-minute open mic reading, followed by our featured poet, but on March 20, we have two featured poets,” said Autrey.

Gabby Bates graduated from Auburn in December 2013 with a Bachelors in Creative Writing and Spanish and will pursue her MFA in Creative Writing at the University of Washington. She was accepted to the Bucknell Seminar for Younger Poets with publications in Broadsided, Redactions, andSouthern Humanities Review. She is also writing a young adult novel.

Madison P. Jones IV is a master’s student, studying literature at Auburn University. He is also founder and editor-in-chief of Kudzu Review, a southern journal of literature & environment. His recent work includes poetry in Harpur Palate, Portland Review, Tampa Review, and Canary Magazine. He is the recipient of the 2012 Robert Hughes Mount, Jr. Poetry Prize.

Keetje Kuipers is the author of a new book, “The Keys to the Jail,” which will be available for sale during the reading. Originally from the Northwest, Kuipers is an Assistant Professor at Auburn. Previously, she was the Emerging Writer Lecturer at Gettysburg College. She holds a B.A. from Swarthmore College and M.F.A. from the University of Oregon. She was a Wallace Stegner Fellow at Stanford University from 2009 to 2011. “The Keys to the Jail” follows Kuipers’ first collection “Beautiful in the Mouth.”

Charitable, tax-deductible gifts in support of the Jule Collins Smith Museum of Fine Art or other programs at Auburn are made through the Auburn University Foundation, which receives such gifts on the university’s behalf. Donors, alumni, and friends can make a philanthropic gift in support of museum collections, programs, or exhibitions.

Learn more about the various means of donating to Auburn University.

Preview what’s currently on view, or come to one of our many free outreach programs.