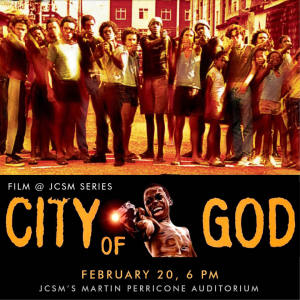 Directed by Fernando Meirelles, City of God is a Brazilian crime drama film that was first released in Brazil in 2002 and internationally in 2003. The story was first published as a novel in 1997 under the same name and is loosely based on real life events. Spread over the course of two decades, the film details life and growth of organized crime in an impoverished area of Rio de Janero, a fevela called Cidade de Deus or “City of God.” Filmed in the actual favela of Cidade de Deus, the movie stars a number of actors from the neighborhood itself. City of God was nominated for four Academy Awards in 2004 and was picked as one of the hundred greatest films of all times by TIME Magazine.

The film is narrated by an amateur photographer named Rocket who, at the opening of the movie, is confronted by an armed gang chasing a chicken. Rocket believes the gang is set on murdering him, which causes a flashback to the 1960s. The storyline follows three amateur thieves, one of whom is Rocket’s brother, and describes their relationship with a young up and coming gangster named Li’l Zé. As the years go by, Rocket develops his interest in photography further and eventually begins taking photographs of Li’l Zé and his gang, who has now become the leader the largest gang in the City of God.

Julie Collins Smith Museum of Fine Art will screen City of God on Thursday, February 20th at 6pm as part of the FILM@JCSM series. Stacey Hunt, assistant professor of Political Science at Auburn University, will introduce the film and lead discussion after the screening. Admission is free and open to the public courtesy of JCSM Business Partners. The Museum Cafe will open at 5:00 pm for live music and tapas menu.