By Communications and MarketingApril 30, 2014Music

On May 1, guitarist Katie Holmes returns for a free concert from noon to 1:00 PM. At 16, Katie has recorded two CDs, has a professional website, and is a sophomore at Columbus State University’s Schwob School of Music. She will perform solo guitar pieces by Mario Castelnuevo-Tedesco, Francesco Da Milano, Mauro Giuliani, Wentzel Matiegka and others. The concert is free and is being sponsored by Virginia Transue. 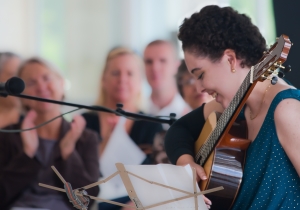 When Katie Holmes last performed for A Little Lunch Music in 2013, she was fifteen and working on her second CD, Quinceanera. The performance was tremendously well received by our audience. She is one of the series’ very best performers.

Since then, she has enrolled in Columbus State University’s Schwob School of Music where she’s studying with Dr. Andrew Zohn. Through Zohn, she met and performed for Grammy-winning classical guitarist David Russell, and even includes a quote from him in her bio: “She has a very good future in this field.”

The first thing she answered when I asked her “what’s new” was the new experience of playing chamber music with other kinds of instruments. Learning new notes for a new, maybe harder piece of music is one thing. Having to match a guitar’s tone to that of something very different–a voice or a flute–is another thing altogether. She said that intonation is more tricky and communication is essential.

Another new thing is learning music theory. If you heard her last year, you have heard her natural musicality. She already had a knack for finding a relationship with the melodies of the music. She now uses music theory to more deeply analyze a piece. “That has helped tremendously how I play,” she said.

Analytical theory can reveal hidden gems in music. The point is to draw attention to those places, making the performance more special. “If you know something is hidden and you want to go find it, it makes it a lot easier and cooler, actually, to play,” Katie said.

Besides her musical progression, Katie is becoming more of a public figure. She has appeared on television more than once, has a professional website, and is cultivating a growing social-media presence. “It’s a little bit surreal,” she said.

And she continues to actively perform in the community as her rigorous college schedule allows. This is all possible, in my opinion, in large part because she has a family that is incredibly supportive and even materially involved in her burgeoning career. Plus, Katie has real talent, and seems tailor-made to be a performer.

As surreal as it may seem to her, it doesn’t keep her from giving audiences nuanced and thoughtful performances of beautiful music.

A musician himself, Patrick McCurry coordinates A Little Lunch Music and occasionally performs for the series and with the jazz group Cullars Improvisational Rotation at the museum on Thursdays from 6:00 to 8:00 pm. He blogs about the arts in our community.