“Good digestions, the gray monotony of provincial life, and the boredom—ah the soul-destroying boredom—of long days of mild content.” Jean-Paul Sartre, No Exit and Three Other Plays

The troubled, yet resilient and beautiful nature of the world is something that I have been attempting to reflect in my work in different ways and, more recently, as a melancholic appreciation for the ephemerality of things. Although I am skeptical about my own obsession and seemingly infinite trust in a huge data of appropriated images, I am (still) unable to leave their “mild content” behind. This ubiquity of images and contrasting representations capable of generating meaning, also serve as an initial stimulus for establishing a sense of time and place. For me, they assert a dynamic idea of history—one that is always mutable and reflective of subjective, and infinite, narrative potentials.

In these predominantly modular works, I engage with specific histories, politics, and identities, often by quoting multiple sources and by juxtaposing seemingly unrelated found images and my own pre-existing works, both belonging to varied time periods. It is this deliberate image crosspollination, this folding of one reality into another, that allows for transcending the limitations of time, scale, and distance. In my work, I wish to foster not only a sense of exploration and discovery but also a recognition of the interdependence of all things. At its best, the resulting work becomes a document of collapsed time. 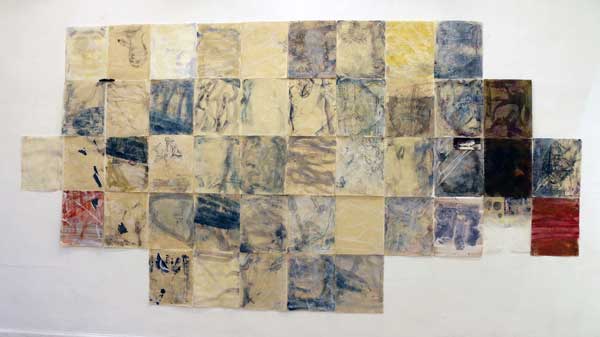